Behind Vatican Walls: I Have a Dream... 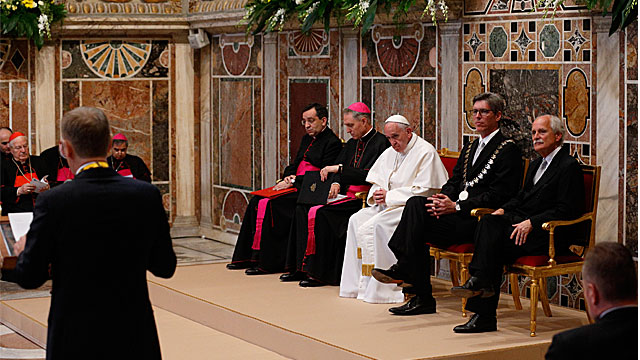 The Charlemagne Prize was created in 1949 by Dr. Kurt Pfeiffer in Aachen, Germany as a reminder and a call for European unity. The 2016 prize was awarded to Pope Francis this week. In post-war Europe several new organizations and pacts were in development. These organizations and agreements would unify Europe economically and politically. However, in 1948 work suddenly stopped on a customs agreement between Britain and France. This stopped the development work being done for a Council of Europe. A group of citizens of Aachen, Germany started looking for some way to inspire a renewed push for European unity. Dr. Pfeiffer came up with the idea of awarding a prize for “most valuable contribution to western European understanding.” The Charlemagne Prize Society was founded in March 1950 and the first prize awarded in May of that same year. Why Charlemagne? The Frankish king, who was later crowned Roman Emperor, is considered the Father of Europe, politically and culturally. Since 1950 recipients have included the Italian Prime Minister Alcide de Gasperi, who was also one of the founding fathers of the European Community, Konrad Adenauer, a former Chancellor of the Republic of Germany who campaigned for an office for European Unity, Robert Schumann, another founding father of the EU, Simone Veil, the first woman president of the European Parliament, Brother Roger, the founder of the Taize Community, Pope John Paul II, and Andrea Riccardi, the co-founder of the Sant’Egidio Community. On ten occasions the prize was not awarded because the Charlemagne Prize Society felt no one deserved the it. In the 1960s and 70s when the European unification process was stagnating, the board of directors felt it was better not to award the prize than to pick a “second rate” candidate. European Prize, Pope from the ends of the earth The board of directors of the International Charlemagne Prize decides who will receive the award each year and publishes the reasoning behind their decision. The board said they decided to award the 2016 prize to Pope Francis because at a time when European citizens are looking for guidance he has a message of hope and encouragement. Specifically, he encourages European officials and citizens to “return to the firm convictions of the founding father of the European Union.” The board refers specifically to the pope’s 2014 address to the European Parliament in which he appealed to every Member of Parliament to support and uphold the dignity of man, and keep the human person at the centre of their political action. This week the board of directors and past Charlemagne Prize Laureates traveled to the Vatican to confer the prize on Pope Francis. The Holy Father gave an uncharacteristically long ( 30 minute) speech that is being called his “I have a dream” speech. He pulled no punches, calling on Europeans to step up, open their hearts and borders, and be the people they always envisioned themselves as being. His speech is well worth reading. The full text can be read here. Watch this week's episode of Vatican Connections below: