Baptism of Korean Layman at Nunciature by Pope Francis 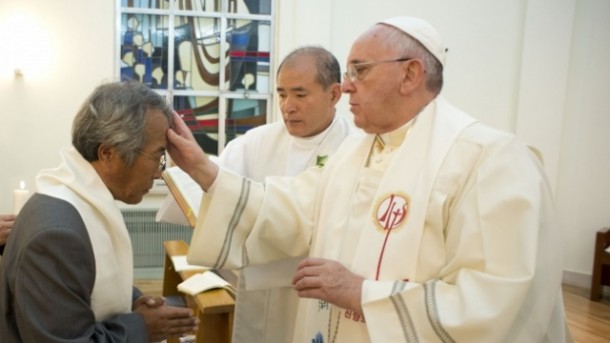 This morning (August 17) at 7:00 a.m. in the Chapel of the Apostolic Nunciature, Mr. Lee Ho Jin received the sacrament of baptism. He is the father of a young boy, one of many young persons who died in the Sewol ferry tragedy earlier this year.
Mr. Lee Ho Jim had asked the Pope for baptism earlier in Daejon during the Pope’s meeting with survivors and family members of this tragedy. The candidate for baptism was accompanied by a son and daughter and the priest who had presented him to the Pope in Daejon. A lay staff member of the Apostolic Nunciature served as godfather for Mr. Lee Ho Jim. The celebration was very simple and was celebrated in Korean by Jesuit Fr. John Chong Che-chon, who has been serving as Korean interpreter for the Pope during this journey in Korea. The Pope intervened personally in the rite of Baptism with the pouring of water and anointing with Sacred Chrism. The newly baptized man took the baptismal name of Francis. The Pope was very happy to be able to take part in the great ministry of the celebration of Baptism of a layman in the Korean Church in this unplanned ceremony.