Assisi: A place of living history 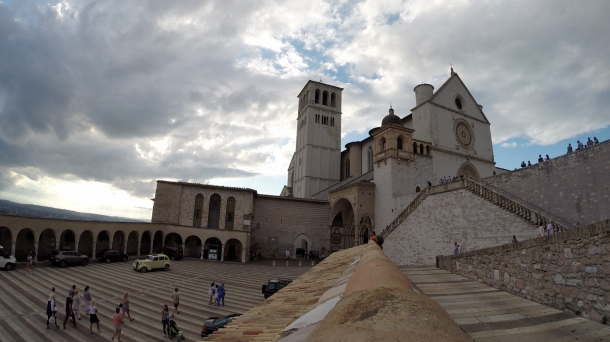 Basilica of St. Francis, Assisi
Perched on the side of a mountain in the central Italian province of Umbria is the historic town of Assisi, best known as the hometown of St. Francis, one of Christianity’s most revered saints. I’ve spoken to many visitors to Assisi over the past few years – especially since Cardinal Bergoglio was elected pope and took the name of St. Francis – and they all seem to describe the little town in the same way: perfectly magical. You can imagine my excitement and expectation then, when I discovered I would be living in Assisi for five weeks to study Italian at the Language Academy!  In my brief but fully immersed time here, I have experienced what many of those visitors preached. Despite its compact layout, Assisi is home to seven major ecclesial sites including two basilicas dedicated to St. Francis and St. Clare, where their remains can be found for veneration. 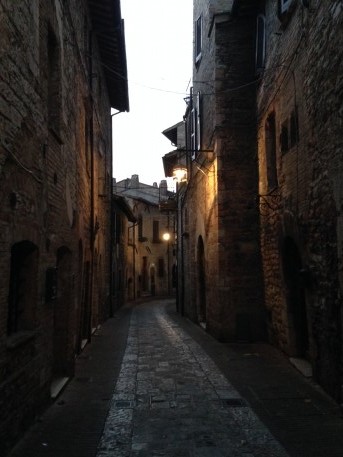 Assisi, Italy
It is a hustling and bustling place; a mix of locals and tourists.  But this doesn’t seem to affect the quaint atmosphere.  The old stone buildings that make up the town, and the many narrow streets, stairways and shortcuts transport the visitor back to the 13th century when it first became a place of pilgrimage after Francis’ death. This feeling of history, which is really a living history, makes Assisi one of those few places in the world where the past encounters the present and sparks the imagination.  Medieval history as we know it is often conceived from the perspective of those centers of the world that once composed ‘Christendom:’ Rome, Paris or Aachen or any number of places once dominated by the movers and shakers of that history. Assisi is quite different, and yet is as historically significant.  It was never the center of major temporal power struggles or cultural battles.  It was, and is, a little town perched on the side of a mountain.  It is ‘off the beaten trail’ and ‘out of the way’ and all the more enticing for it. It was only two years after Francis of Assisi died that he was declared a saint.  The foundations of the basilica built in his name that now dominates the Assisi skyline on the edge of the town were laid only a few decades later.  The countless pilgrims and visitors to Assisi over the centuries experienced what we experience: a small, charming town that is home to two of the most widely reverenced and highly respected individuals in Christian history.  It’s a place where your imagination can run free, as St. Francis’ did eight hundred years ago.