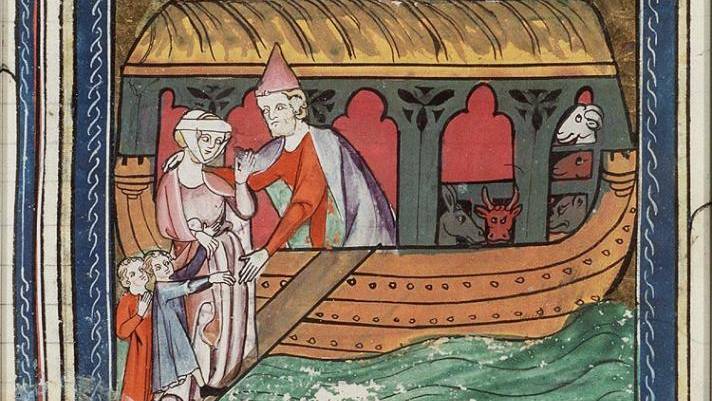 Noah enters the ark with his family and the animals. Illuminated Manuscript. Koninklijke Bibliotheek/National Library of the Netherlands

Matthew 24:37-44 When I was reading Maria's post about fasting in Advent, I was struck by how similar and how different Advent is to Lent. Both are traditionally penitential seasons that involve more frequent almsgiving, prayer, and Mass attendance alongside fasting. At the same time, Advent has a unique character to it. Advent reminds us of the end of all things, including good things. They come to an end precisely so God can make room in the manger of the world for the birth of the New Creation, so God can dwell with us forever and lead us to be who he always intended us to be. (Revelation 21:1-6) Of course, when Jesus says that his Second Coming will be like the time of Noah, when everyone was "eating and drinking, marrying and giving in marriage," he isn't saying that eating and getting married are inherently bad. Jesus ate and drank, and above all, offered the Paschal Bread and Wine to his friends. By doing so, he hallowed all the dinner tables of the world, and gave us the "source and summit" of the Christian life. And God is faithful love itself; he sanctifies the gift of marital faithfulness with a Sacrament of its own. But as in the days of Noah, and throughout time, we often eat and get married as if those things were going to last forever, as if food and marriage were the highest things we can attain. We horde and waste food while millions go hungry. We retreat into our own marriages, families, and social groups while rejecting those who are different. Those are just some examples of what happens when we hold on so tightly to temporary things, forgetting that even good things will come to an end. But as in the days of Noah, God is sending a flood that will "make all things new." (Revelation 21:5) Our social and even biological arrangements of marriage and family life will give way—be transformed—by the Bridegroom who takes us all as his bride. And ordinary eating and drinking, that great source of sustenance and place of friendship, will give way—be transformed—by the Wedding Feast of the Lamb. So for now, for the next four weeks, let's take this time to focus, to remember, that even the good things in life merely serve to point to something beyond themselves. They point to the eternal gift of Christ himself, co-eternal with the Father, born in a manger, and coming again to make all things new.