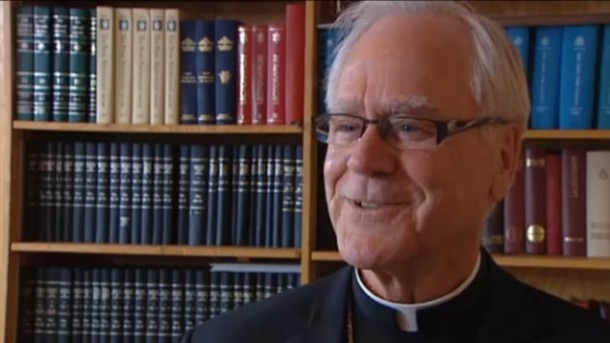 (CCCB – Ottawa)  His Holiness Pope Francis today accepted the resignation of the Most Reverend V. James Weisgerber as Archbishop of Winnipeg, and named as his successor the Most Reverend Richard Gagnon. At the time of his appointment, the Archbishop-elect was Bishop of Victoria. Archbishop Weisgerber has been responsible for the Archdiocese for the past 13 years. He had offered his resignation to the Holy Father when reaching the age of 75, as required by the Code of Canon Law.
Born in 1948 in Lethbridge, Alberta, Archbishop-elect Gagnon studied philosophy, history and English at Simon Fraser University in Vancouver, in addition to earning a teaching certificate. After doing seminary studies at the Pontifical Beda College in Rome, he was ordained to the priesthood in 1983 for the Archdiocese of Vancouver. He served there in many capacities, including as pastor, Vicar General, archdiocesan consultor, director of the office of religious education, and member of the presbyteral council. He was named Bishop of Victoria in 2004. Archbishop-elect Gagnon served from 2007 to 2008 on the Permanent Council of the Canadian Conference of Catholic Bishops (CCCB). He is currently a member of its English Sector Commission for Liturgy and the Sacraments, and had previously been a member of the Sector’s former Commission for Social Communications. He has served on the Board of Catholic Missions in Canada
Before being named to the Archdiocese of Winnipeg, Archbishop Weisgerber was Bishop of Saskatoon, 1996 to 2000. Previously, he had been a priest of the Archdiocese of Regina and, from 1990 to 1996, General Secretary of the CCCB. As a Bishop and member of the CCCB, Archbishop Weisgerber served on its Commission for Social Affairs (now the Commission for Justice and Peace) as a member and consequently its Chairman, as well as being a member of the English Sector Commission for Liturgy (as it was then called). After being elected to the CCCB Permanent Council as an English Sector representative in 2003, he was elected by the other members of the Council as CCCB Co-Treasurer. In 2005, the members of the Conference elected him Vice President, and from 2007 to 2009 as their President. In 2001, he was a CCCB delegate at the Ordinary General Assembly of the Synod of Bishops on The Bishop: Servant of the Gospel of Jesus Christ for the Hope of the World. From 2001 to 2002, he was appointed by the Holy See to the International Methodist and Roman Catholic Dialogue. Archbishop Weisgerber had a key role in helping organize the delegation of representatives from the Assembly of First Nations and the Catholic Church in Canada whom Pope Benedict XVI received in audience on April 29, 2009. It was on this occasion that the Holy Father expressed his sorrow at the anguish caused by “the deplorable conduct of some members of the Church” in the operations and management of the former Indian Residential Schools.
According to the CCCB 2013 Directory, the Archdiocese of Winnipeg has 89 parishes and missions, with a Catholic population of 158,095, served by 61 diocesan priests, 23 priests who are members of religious communities, 111 Sisters and Brothers, also members of religious communities, and 18 permanent deacons.