The last two weeks have been difficult ones for faithful Catholics as the clergy sexual abuse scandal has stained headlines and the Church worldwide.
There is no denying that crimes of abuse are appalling and must be dealt with properly.  However, media outlets are now taking reports of abuse as an opportunity to abase our Holy Father, Pope Benedict XVI.  Professional journalism is out the window, and axe grinding is in.  It has also been sickening to read some of the online comments by readers of news articles -- the absolute vulgarity, and hate directed towards the Catholic faith, the Church, priests, and the Pope is disgusting and offensive. Thankfully, articles are beginning to appear defending the Holy Father (The American Papist blog has a nice list of articles to check out), and Church officials are answering back. I'd like to share one response with you.  On Palm Sunday, Archbishop Timothy Dolan of New York defended the Holy Father at the conclusion of Mass.  He noted the Pope encourages "complete honesty" and accepts the "just criticism for tragic horrors long past."  Just is the key word though: New York's prelate called on the criticism and scrutiny to be "fair" (something, which he points out, it has been far from). He also offered an important reminder: PRAY FOR POPE BENEDICT.  We've always encouraged our viewers to pray for the Holy Father's intentions, but as we move through Holy Week let's especially remember our Pontiff in prayer.  See Archbishop Dolan's stirring comments below: 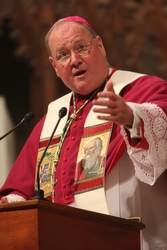 May I ask your patience a couple of minutes longer in what has already been a lengthy — yet hopefully uplifting — Sunday Mass? The somberness of Holy Week is intensified for Catholics this year. The recent tidal wave of headlines about abuse of minors by some few priests, this time in Ireland, Germany, and a re-run of an old story from Wisconsin, has knocked us to our knees once again. Anytime this horror, vicious sin, and nauseating crime is reported, as it needs to be, victims and their families are wounded again, the vast majority of faithful priests bow their heads in shame anew, and sincere Catholics experience another dose of shock, sorrow, and even anger. What deepens the sadness now is the unrelenting insinuations against the Holy Father himself, as certain sources seem frenzied to implicate the man who, perhaps more than anyone else has been the leader in purification, reform, and renewal that the Church so needs. Continue reading