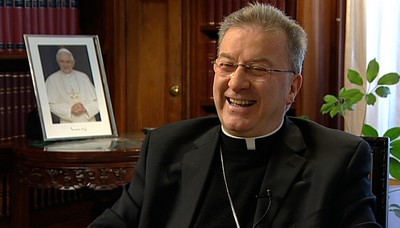 Dear Brother Bishops,
First of all I would like to thank Archbishop Weisgerber with all my heart for the kind words he addressed to me on your behalf as well as for this video which has moved me because of the good will that has inspired it. The Plenary Assembly of the Canadian Conference of Catholic Bishops of the Latin and Eastern Rites, affords me the opportunity to extend my sincere and deep gratitude to the Presidents that I have known since 2001 : 1. I would like to thank each of you for having welcomed me and accompanied me during our common mission to serve the Lord and to proclaim the Kingdom of God in a spirit of charity and communion, that finds our meeting and unity in the Successor of Peter. 2. During the past eight years, I was able to discover the immense geographic territory of Canada, as I visited 64 of the 70 ecclesiastical jurisdictions, especially on the occasion of episcopal ordinations and installations of new bishops. I came to appreciate your commitment and your zeal, as well as that of your priests and religious men and women in your ecclesial communities. I saw first hand the commitment of a living Church that seeks to be present in the world with the weakness of its means and the strength that is granted to her by the presence of the Lord; a Church that sets its gaze on the transcendent to which we are called; a Church that does not seek favors or privileges, but desires to place itself at the service of and alongside each person, to share in friendship, in mutual listening, in solidarity along life’s journey, as it gives witness to the faith and intelligence of the reality that flows from the school of her Master. 3. In his homily on the occasion of taking possession of the Cathedral of St. John Lateran, shortly after his Installation as Bishop of Rome, Pope Benedict spoke these words:

It is through witnesses that the Church was built - starting with Peter and Paul and the Twelve, to the point of including all who, filled with Christ, have rekindled down the centuries and will rekindle the flame of faith in a way that is ever new… But this chorus of witnesses is also endowed with a clearly defined structure: the successors of the Apostles, the Bishops, who are publicly responsible for ensuring that the network of these witnesses survives. The power and grace required for this service are conferred upon Bishops through the sacrament of Episcopal Ordination. In this network of witnesses, the Successor of Peter has a special task. It was Peter who, on the Apostles' behalf, made the first profession of faith: "You are the Messiah, the Son of the living God" (Mt 16:16). This is the task of all Peter's Successors: to be the guide in the profession of faith in Christ, Son of the living God. The Chair of Rome is above all the Seat of this belief” (May 7, 2005).

This is the faith that unites us into the one body that forms the Church, in the past and in the present. As Paul in his letters to the Romans and the Corinthians, as Peter in the Gospel of John, so too are we called to repeat and proclaim: “Jesus is Lord” and “You have the words of life." (ibid.) 4. At the end of my mission in Canada, I feel the need to thank the Lord for having called me to work among you in the vineyard. If some positive results were achieved, I owe this to those who assisted me in the work of the Nunciature, and most especially to the confidence and collaboration that I experienced fully, cordially and fraternally with you. 5. How could I not share your projects, your significant challenges, your moments of celebration and joy, as well as the moments of darkness and suffering? Most recently I shared with all of you, with your priests, with the Church in Canada and in the world, the tears and cry of suffering of Archbishop Anthony Mancini over the tragic situation of one of our brothers. I share Archbishop Mancini’s heartfelt words:

At this time when so many hearts have been broken, we need to know again or for the first time, the healing grace of God’s love. Such healing grace can only come from all of us sharing together our faith and convictions that, in spite of sin in all its forms, mercy is stronger than anger, forgiveness is more powerful than rejection and reconciliation is more transformative of spiritual devastation into new life possibilities. (October 2, 2009)

6. Allow me also to repeat what I said at the Mass for graduate theology students at the University of St. Michael’s College in Toronto two weeks ago:

The Church in Canada bears the wounds together with the victims of a tragic past, and has made and continues to make systematic efforts to prevent the repetition of such abuses and exploitation… Yet we can never underestimate the destructive power of sinfulness and evil that tears apart the fabric of our community (October 7, 2009).

7. When I stood before you for our first meeting on September 20, 2001, I quoted a classic description of this country: « quelques arpents de neige » (a few acres of snow). In fact, experience taught me that there are not a few acres, there are thousands of acres of snow! I was able to see this first hand during my visits to your dioceses. These different trips helped me to admire even more the zeal and extraordinary courage of the builders of this country and this Church; they will always inspire new generations a mari usque ad mare (according to the Canadian motto) and those who remember (according to the motto of Quebec). 8. Fortunately, snow and winter are not the final word. Each year I was surprised at the blossoming of life that heralded springtime; as soon as the snow disappeared, the first flowers pushed through a still frozen ground. I think that a similar dynamic is at work in the Church: if for some, a certain lethargy seems to affect Christian life in the challenges “ad intra et ad extra” (Benedict XVI, October 4, 2009), for those with “far-seeing eyes” (Numbers 24:3), the springtime of the Spirit is always at work. In the pathways emerging from World Youth Day 2002, I have been able to witness the beautiful signs of vitality in gatherings of young people and in the New Communities. At the Eucharistic Congress of Quebec, I saw a joyful people gathered around their Lord. I have also seen much love for the Church and for the Holy Father. 9. Your Conference has dealt with numerous, difficult dossiers on the doctrinal level as well as in the area of social concerns. We were particularly happy to see the important steps of reconciliation undertaken toward the Communities of the First Nations. The historic meeting that took place last April with the Holy Father remains very emblematic. The dossiers on Family, Marriage, Life, the transmission of the faith to younger generations through appropriate education remain works in progress. Last May’s Letter from the Congregation for Catholic Education gives specific guidelines for this important area. 10. From its beginnings, the way of the Church through history has never been easy. Despite hostility, the Church has always known the living ideal of the light that comes from men and women, through their heroic witness of faith and charity. “When we read the saints' names we can see how often they have been - and continue to be - first and foremost simple people from whom shone - and shines - a radiant light that can lead others to Christ” (Benedict XVI, May 7, 2005). 11. We are not without our challenges even today, and we know that they are not small. The principal challenge of our age seems to me to be anthropological, a hegemonic vision of the world that transforms the human person into a socially engineered object. A new anthropology imposes cultural paradigms that are unattackable and indisputable. One offers, according to the inspired expression of a young Spanish philosopher, «the opportunity to transform one’s interest and one’s desires into liberties and rights. However these are not more inherent to nature but they become gracious concessions of a power that legally consecrates them » (J. M. de Prada). 12. In this regard, I would like to share with you the words of Pope Benedict XVI, with the usual clarity and profound intelligence of his Magisterium, as he addressed the Bishops of Brazil during their recent Ad Limina Visit on September 7, 2009 :

Beloved brothers, in the decades that followed the Second Vatican Council, some have interpreted openness to the world not as a requirement of the missionary zeal of the Heart of Christ, but rather as a passage to secularization, seeing in it several values of great Christian depth, such as equality, freedom, and solidarity, and showing that they were ready to make concessions and to discover areas of cooperation. So it was that certain leading clerics took part in ethical debates in response to the expectations of public opinion, but people stopped speaking of certain fundamental truths of faith, such as sin, grace, theological life and the last things. They were unconsciously caught up in the self-secularization of many ecclesial communities; these, hoping to please those who did not come, saw the members they already had leave, deprived and disappointed. When they meet us, our contemporaries want to see what they see nowhere else, that is, the joy and the hope that come from the being with the Risen Lord.

13. Our witness as Bishops, in communion with the Bishop of the Church of Rome, “who presides in charity”, according to the definition of St. Ignatius of Antioch in the Prologue to his letter to the Romans, is a pledge of obedience to Christ and his Word. At times we might be tempted to test the effectiveness of our vocation and our ministry with the measures of numbers and success. The example of St. Peter helps us; in a moment of crisis, when several disciples wanted to walk away from him, Peter said: “Lord, to whom shall we go? You have the words of eternal life; we believe and we know that you are the Holy One of God” (John 6:68). 14. In closing, I would like to offer once again my sentiments of gratitude for the many expressions of fraternal affection and friendship that I have received from you over these past weeks. 15. Finally, I borrow the words of St. Augustine- those same words spoken during the Angelus by Pope John Paul II at the conclusion of World Youth Day 2002 at Downsview Park in Toronto: “Each of us will return home. We have been happy together in the light we have shared. We have really enjoyed being together. We have really rejoiced (and I must also add ‘we have shared sorrows’). But as we leave one another, let us not leave Him" (In Io. ev. tr., 35,9; 34th Tuesday, Ordinary Time), always “keeping the unity of the one Spirit” (Ephesians 4:3).