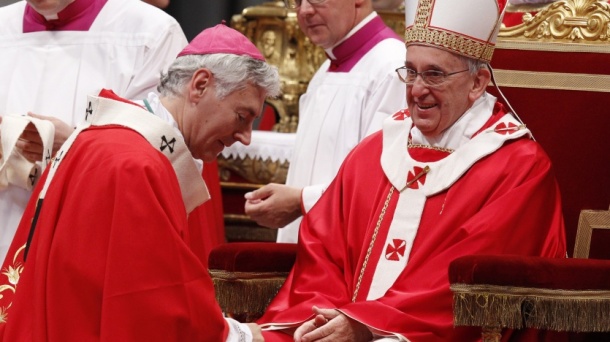 Archbishop Murray Chatlain of Keewatin-Le Pas, Manitoba, stands up after receiving a pallium from Pope Francis in St. Peter's Basilica at the Vatican, today, June 29, 2013. The pope presented woolen pallia to 34 archbishops during the liturgy.
His Holiness Pope Francis gave the pallia to newly appointed Metropolitan Archbishops at the Mass celebrating the Solemnity of the Apostles Saints Peter and Paul. Archbishop Murray Chatlain of Keewatin-Le Pas was accompanied on his trip to Rome by his parents, sisters and brother. In addition to his responsibilities as Archbishop of Keewatin-Le Pas, Archbishop Chatlain is also Apostolic Administrator of the Diocese of Mackenzie-Fort Smith.
The pallium is a narrow woolen band that hangs around the neck and shoulders, and is decorated with six black crosses. Originally it was reserved for the liturgical use of the Pope, but over the centuries was given to certain Bishops as a sign of their relationship with the Apostolic See. Since the9th century, it is given only to Metropolitan Archbishops as a sign of the authority they share with the Holy Father. The wool for the pallium comes from two lambs offered every year to the Pope on January 21, the feast of Saint Agnes.
-
CNS photo/Paul Haring