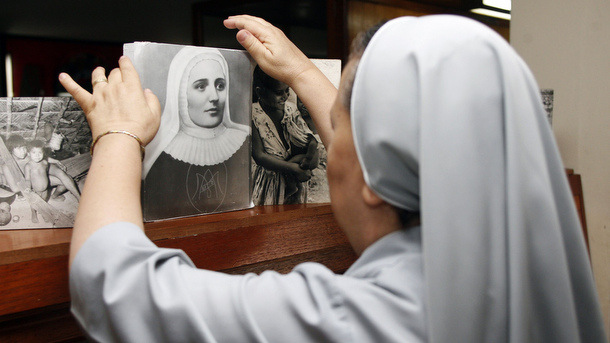 February 11 will long be remembered as the day Pope Benedict announced his resignation – the first pontiff in 600 years to do so. But do you recall the event during which he made his stunning declaration? The Holy Father had convoked a meeting of cardinals to vote on three causes for canonization. As expected, the cardinals confirmed the blesseds, whose record of sanctity had already satisfied the Congregation for the Causes of Saints. And then Benedict read the Latin text that left the cardinals in stunned silence. Just over three months later, those blesseds will be proclaimed saints under a new pontificate. Salt + Light will air the Canonization Mass this Sunday at 9:30am ET/6:30am PT, repeating in French at 4:00pm ET / 1:00pm PT. So who are the new Saints? Before the consistory in February, Vatican Radio published a profile of each of them: Blessed Antonio Primaldo and companions, Blessed Maria Guadalupe Garcia Zavala, and Blessed Laura of Saint Catherine of Siena (shown above).

Blessed Antonio was a tailor in the city of Otranto, Italy, in the 1400s. In 1480 the city was invaded by Turkish Muslims who threatened to kill all the men, but promised to grant their lives and the freedom of their women and children if they renounced their faith. Antonio remained firm, and encouraged his fellow citizens to stand strong in their faith. He was the first to be beheaded, followed by 799 others. Relics of the Blessed Martyrs of Otranto are held in the Cathedral crypt. [Read more...]