Apostolic Voyage to Holy Land Wraps Up in Jordan, Continues to Israel 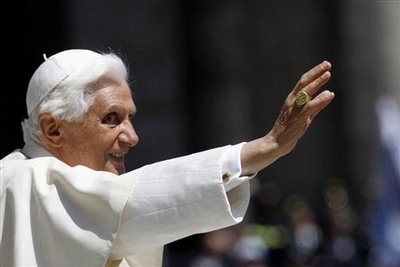 Pope Benedict wrapped up his visit to Jordan over the weekend and arrived in Tel Aviv on Monday. Before departing, he spoke fondly of his trip to Jordan, and highlighted some of his activites:

It has been a particular joy for me to be present at the launching of a number of major initiatives promoted by the Catholic community here in Jordan. The new wing of the Regina Pacis Centre will open up fresh possibilities of bringing hope to those who struggle with difficulties of various kinds, and to their families. The two churches to be built in Bethany will enable their respective communities to welcome pilgrims and to foster the spiritual growth of all who worship in that holy place. The University at Madaba has a particularly important contribution to offer to the wider community, in forming young people from various traditions in the skills that will enable them to shape the future of civil society. To all who are involved in these projects, I offer good wishes and the promise of my prayers.

He also noted his visit to the Mosque Al-Hussein Bin Talal, where he met with Muslim leaders, members of the diplomatic corps, and University Rectors, and encouraged all Jordanians, whether Christian or Muslim, to "build on the firm foundations of religious tolerance that enable the members of different communities to live together in peace and mutual respect." On that note, he congratulated Jordan's King for fostering inter-religious dialogue, and the care he shows the Christian community of Jordan wanting "to put on record how much his commitment in this regard is appreciated." The Pontiff closed with a message to the Christians of the region:

It was truly a joy for me to experience these Eastertide celebrations in company with the Catholic faithful from different traditions, united in the Church's communion and in witness to Christ. I encourage all of them to remain faithful to their baptismal commitment, mindful that Christ himself received baptism from John in the waters of the river Jordan.

The Holy Father arrived at Tel Aviv's Ben Gurion airport Monday morning, and was met by Israeli President Shimon Peres and Prime Minister Benjamin Netanyahu, and Christian, Jewish, and Muslim representatives. At the airport, the Pope continued his theme of peace, appealing to Israelis and Palestinians:

In union with people of good will everywhere, I plead with all those responsible to explore every possible avenue in the search for a just resolution of the outstanding difficulties, so that both peoples may live in peace in a homeland of their own, within secure and internationally recognized borders. In this regard, I hope and pray that a climate of greater trust can soon be created that will enable the parties to make real progress along the road to peace and stability.

In his welcome address, the Pontiff also strongly condemned anti-Semitism:

It is right and fitting that, during my stay in Israel, I will have the opportunity to honor the memory of the six million Jewish victims of the Shoah, and to pray that humanity will never again witness a crime of such magnitude. Sadly, anti-Semitism continues to rear its ugly head in many parts of the world. This is totally unacceptable. Every effort must be made to combat anti-Semitism wherever it is found, and to promote respect and esteem for the members of every people, tribe, language and nation across the globe.

He continued on this point when visiting the Holocaust memorial Yad Vashem. Praying in silence, and meeting with Holocaust survivors, Pope Benedict later offered words of reassurance:

The Catholic Church, committed to the teachings of Jesus and intent on imitating his love for all people, feels deep compassion for the victims remembered here. Similarly, she draws close to all those who today are subjected to persecution on account of race, color, condition of life or religion – their sufferings are hers, and hers is their hope for justice. As Bishop of Rome and Successor of the Apostle Peter, I reaffirm – like my predecessors – that the Church is committed to praying and working tirelessly to ensure that hatred will never reign in the hearts of men again. The God of Abraham, Isaac and Jacob is the God of peace (cf. Ps 85:9).

He concluded his talk:

For a full wrap on the Holy Father's pilgrimage, check out the May 11th edition of Zoom this evening with host David Naglieri, and stay tuned to our on-going live coverage with hosts Kris Dmytrenko and Alicia Ambrosio. - Photo: AP / Alessandra Tarantino