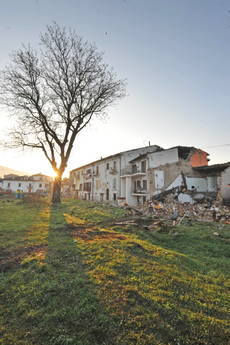 Holy Week is always a little difficult for me, as I remember the Holy Weeks I spent living in Rome and yearn to go back. This week, Holy Week is again difficult, but for another reason. I'm waiting to hear back from friends and relatives who live in and around the epicentre of the 6.3 magnitude earthquake that hit L'Aquila, Italy on Sunday night. Located in central Italy, about 95 kilometers north east of Rome, L'Aquila has a population of nearly 73,000 and is situated on a hillside in the middle of a narrow valley, surrounded by the Appenine mountains. Although it is a small city it is home to a university, a fine arts institute, a symphony orchestra, a state conservatory and a film institute. The city was founded by Fredrick II, the Holy Roman Emperor and King of Sicily. The artistic and historical riches in this city are beyond anything the North American continent can imagine. On April 6th, at approximately 3:30 am, L'Aquila shook. The quake was felt in Rome 95 kilometers away through the Abruzzo and Molise regions and, as one friend reported, the power went out and roofs gave way in Pescara, about 100 kilometeres east of the epicentre. L'Aquila is a medieval town and its Baroque and renaissance buildings were brought down in the quake, including the dome of one of its churches. Perhaps the worst report, though, is the university dormitory and other residential buildings that collapsed, prompting citizens to start digging with their bare hands in hopes of rescuing suvivors. So far, over 200 deaths have been reported with the number expected to rise as the rubble is cleared. As evening descended on Italy, the city of L'Aquila had nowhere to put it's now-homeless citizens. According to reports, 26 cities and towns have been damaged in the region. Power and phone lines are down in many areas. If you are having trouble reaching someone there, be aware authorities have asked citizens to not use their cell phones. Some survivors have been found because they were able to use their cell to call for help and authorities want to keep cell phone lines open for that purpose. In the meantime, all we can do as we sit and wait for the "all okay" from our friends and relatives is to pray for their safety. If you are one of the loved ones in Italy, please let your friends and family outside the country know where you are and how are.