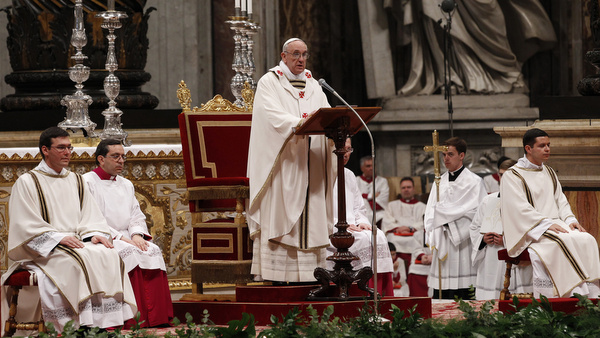 The Church celebrates the Chrism Mass on the threshold of the Sacred Triduum, on the day when, by a supreme priestly act, the Son of God made man offered himself to the Father to redeem all humanity. On Holy Thursday morning at 9:30 Rome time, Pope Francis presided at the Chrism Mass in St. Peter’s Basilica. Joining him were Cardinals, bishops and priests who live in Rome. The Chrism mass is celebrated in cathedrals throughout the whole world on one of the days during Holy Week. Most dioceses have their celebration with the local presbyterate (priests) gathered around their bishop, earlier in the week. In Rome, the mass is celebrated on Holy Thursday morning. During this liturgy, priests renew the promises first made at the priestly ordinations, to their Ordinary (Bishop). These promises or commitment of pastoral service are made publicly, and the people pledge their prayers and support in a very joyful and encouraging way.
Also during the mass, the holy oils of the sick, of catechumens and of chrism are blessed and distributed to the parishes of the diocese. Our Church uses three sacramental oils. The oil of catechumens is used to strengthen those who are preparing for baptism for their struggle with temptation and sin. The oil of the sick is used for those who are seeking healing of mind, body and spirit. The Holy Chrism, our 'Christ oil,' is used at Baptism, Confirmation, at the ordination of priests and bishops and at the dedication of a church building and altar.
The Chrism Mass is always a highlight in the life of any bishop. Because a bishop is the one who consecrates chrism, this liturgy represents his own pastoral ministry and the unity of the whole diocese with him in carrying out the mission of the Church.
Below, please find the full text of Pope Francis homily for the Chrism Mass: