As I mentioned in my blog post this past Friday, this weekend marked the start of the 2010 Clericus Cup soccer tournament in Rome, a unique tournament for seminarians and priests living in Rome. 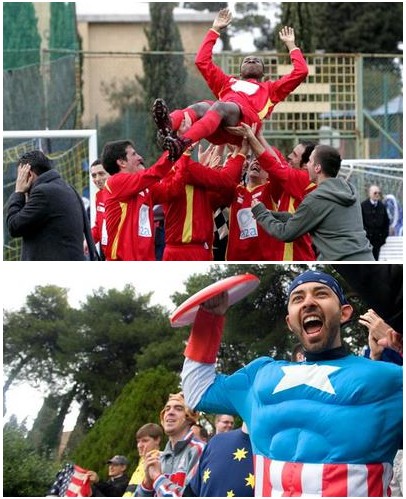 On Saturday morning, on the field of the Pontifical Oratory of St. Peter, the team from the Neocatcechumenal Way's Redemptoris Mater seminary took the field against Saint Anselm College, scoring once at the 15 minute mark and shutting out the Saint Anselm team for a 1-0 victory. The North American Martyrs and the Brazilian College played a scoreless game until the 58 minute mark. The Martyrs scored once and victory seemed assured. However, in the "make up" minutes at the end of the game the Brazilian team got one past the Martyrs' goalie, tying the game. Clericus Cup rules don't allow tied games, so shoot outs were the order of the day with the North American team taking the game 5-4. Later in the morning Anglo-Celtic Colleges United and France's Gallic Seminary ended their game scoreless and also went into shoot outs, with Ireland scoring three times while the Gallic team failed to get the ball past the Anglo-Celtics goalie. The Pontifical College of St. Paul took on the Polish Institute and shut them out 4-0. In keeping with Italian tradition the soccer games continued on Sunday afternoon. Last year's tournament finalists, Mater Ecclesia and Pontifical Urbanian College faced off. Mater Ecclesia shut out the Urbanian College 1-0. The Mexican College and the Roman Seminary faced off in a tense game. Regular time ended with a 2-2 tie, sending the game into shoot outs. The shoot outs ended with a 6-5 score for the Roman seminary team. Sedes Sapiente beat the Guanellians 2-1, and the Latin American college beat the Gregorian University team 6-5. Next weekend the North American College takes on St. Paul's Pontifical College. For more on the Clericus Cup visit the official site HERE.