An ode to the Nativity

The Nativity, it’s the most famous childbirth of all time, immortalized in hundreds of different artistic representations.
One of those representations are Nativity plays.  I remember my junior kindergarten class’ Nativity play like it was yesterday. I was cast as Mary and was barely visible underneath my pale blue garments. I was absolutely over the moon about playing mother to the Baby Jesus, so ecstatic in fact that I grabbed the doll from his manger to cradle him in my arms - an act of deep maternal affection in my humble defense. My kindergarten teacher Mrs. DeSouza (who had previously told me not to pick up the doll) did not see eye to eye with me. Discipline came in the form of being relegated to playing a Shepherd with the boys in my class, holding a hockey stick in the place of shepherd staff. 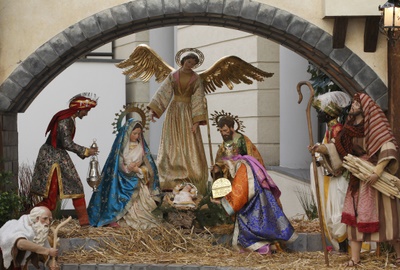 Another representation, popular and commonplace throughout the world, are the Nativity scenes where Christians recreate and recall each year the events of that fateful night when Christ came into the world. We all have special memories from our childhoods of the Nativity.  The version of the Nativity scene that I grew up with at home was a dollhouse sized stable made of tree bark and covered in moss and wire, complete with Mary, Joseph and animal figurines. The manger stayed empty until December 25th when my mother would place the Jesus figurine in its rightful place at the centre of the display. In my travels I have come across new and interesting forms of the Nativity. Never had I seen anything like what I saw last year on Via San Gregorio Armeno in Naples, Italy. Neapolitans call the historic street ‘la via dei pastori’ – shepherds’ street. Every shop on Via San Gregorio Armeno is dedicated to Nativity scenes. I had never seen so many different variations of the Nativity concentrated all in one place. Here, you can find everything a heart desires when it comes to Nativity sets. They come in all shapes and sizes too, I saw a Nativity scene as big as a four door van. The artisans make everything by hand. The quality and attention detail is evident in each piece. These artisans have made the construction and artistry of the Nativity scene their livelihood, and they take their work very seriously - You could easily spend a small fortune outfitting a stable with each ornate figure. And say you wanted to dabble in the art of Nativity making – the shops also sell all the necessary materials to make your very own Nativity. Projects like the ones I saw on Via San Gregorio remind me of the joy and magic of the Nativity. The Nativity scene is that special reminder of why we celebrate Christmas. It isn’t just a part of the home decorations, but a moment in history immortalized. The continued artistry and dedication to recreating that scene shows us its lasting impression on our lives and our Christian faith. - CNS photo/Paul Haring: A Nativity scene is pictured at the Vatican Museums. This scene was made by craftsmen of Guanajuato, Mexico, and is one of several creches at the Vatican.