An integral response to the Paris attacks 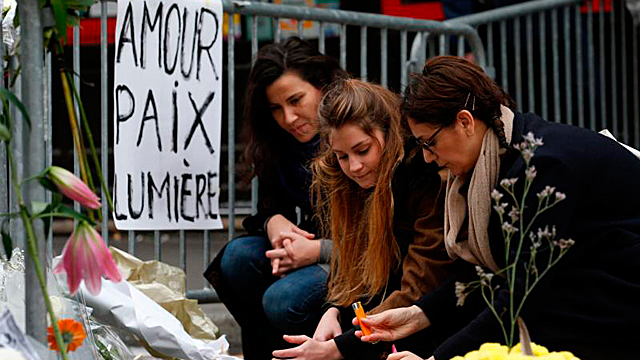 The brutal attacks in Paris last Friday have sparked an impassioned conversation that has sadly, though necessarily, become part of our everyday lives, namely, what are we going to do about this?
The draconian responses of the French government in pursuit of the perpetrators and against ISIS strongholds in Syria are understandable. So too is their effort to galvanize the European Union toward stricter security measures.
How ISIS will ultimately be defeated is unclear. The Pope’s hauntingly astute reference on Saturday to what he sees as a “piecemeal Third World War” hints at the kind of globally allied military response that may be necessary and inevitable.
An equally pressing and related question is the refugee crisis. The Paris attacks have pushed the debate on whether Western countries can and should open their borders to Syrian refugees when among them are, potentially, violent extremists with close ties to ISIS.
This is a question worth reflecting on because it is one that each citizen of a Western nation can answer for themselves and actually do something about. From the Catholic perspective, I don’t think it’s possible to argue that the borders must be closed to these refugees, most of whom are women and children and not extremists. The Gospel and the Church’s long-standing social magisterium simply don’t allow for such an interpretation. The argument for due diligence at the level of government and border security in the resettlement process is valid. In Canada, for example, where the new Liberal government has promised to resettle 25,000 Syrian refugees by January 1, 2016, many informed voices—among them migration experts and immigration attorneys—are being raised about the logistical impossibility and security risks of trying to reach that goal simply for the sake of fulfilling a campaign promise.
If we grant that Western nations, including Canada, should open their borders to Syrian and other refugees in a safely accelerated way, the deeper question becomes: what happens once they are resettled?
Here, the Catholic Church has a responsibility to raise its voice and lead by example. It’s not by coincidence that in September Pope Francis called on all European parishes and religious houses to take in a refugee family. He called it a “concrete act of preparation for the Holy Year of Mercy.” This is not a one-time administrative sponsorship, but a community adoption. And that means helping to incorporate families into the community and wider society. It is long-term commitment.
This, it seems to me, is where efforts should be focused. For a long time Muslim community leaders, academics and former refugees have spoken forcefully of the problems of social and cultural isolation, poverty and a lack of education among resettled communities. The solution, as Francis might say, is integral inclusion. That requires of each person in a local community to sacrifice a little bit: money, time, energy, and comfort-level. It has to be a community effort and it has to be sustained. Part of that effort is government social aid that citizens must advocate for and contribute to. The safety and security of our societies will depend on this kind of generous and deeply Christian response.
Back in 1967, Pope Paul VI wrote a prophetic encyclical entitled Populorum Progressio, On the Development of Peoples, in which he said very clearly that integral development is the new name for peace:

When we fight poverty and oppose the unfair conditions of the present, we are not just promoting human well-being; we are also furthering man's spiritual and moral development, and hence we are benefiting the whole human race. For peace is not simply the absence of warfare, based on a precarious balance of power; it is fashioned by efforts directed day after day toward the establishment of the ordered universe willed by God, with a more perfect form of justice among men (76)…
We must travel this road together, united in minds and hearts. I feel it necessary to remind everyone of the seriousness of this issue in all its dimensions, and to impress upon them the need for action. The moment for action has reached a critical juncture. Can countless innocent children be saved? Can countless destitute families obtain more human living conditions? Can world peace and human civilization be preserved intact? Every individual and every nation must face up to this issue, for it is their problem. (80)

Catholic communities in the Western nations have a great responsibility in this matter. By our faith and rich tradition we have the luxury of seeing the interconnectedness of these various and complex elements. Where there is much fear and uncertainty, violence and suffering, there is the Church, as Pope Francis reminds us in Evangelii Gaudium 49:

I prefer a Church which is bruised, hurting and dirty because it has been out on the streets, rather than a Church which is unhealthy from being confined and from clinging to its own security. I do not want a Church concerned with being at the centre and which then ends by being caught up in a web of obsessions and procedures. If something should rightly disturb us and trouble our consciences, it is the fact that so many of our brothers and sisters are living without the strength, light and consolation born of friendship with Jesus Christ, without a community of faith to support them, without meaning and a goal in life. More than by fear of going astray, my hope is that we will be moved by the fear of remaining shut up within structures which give us a false sense of security, within rules which make us harsh judges, within habits which make us feel safe, while at our door people are starving and Jesus does not tire of saying to us: “Give them something to eat” (Mk 6:37).

On Further Reflection In the complex world of the 21st century there are more questions than answers. The challenge for the Church is to find new and effective ways of bringing the Gospel message into the conversation.  For her part, the Church can act as a much needed voice of dialogue, reason and charity. On Further Reflection invites readers to go beyond the headlines to see the deeper realities affecting the Church and society.  Sebastian Gomes is a producer and correspondent for S+L TV.