An extraordinary prayer in an unlikely place

In nearly six years at S+L, my most challenging film shoot was at the Church of the Holy Sepulchre in Jerusalem. Widely considered the holiest shrine in the world, the church features prominently in the documentary Within Your Gates. 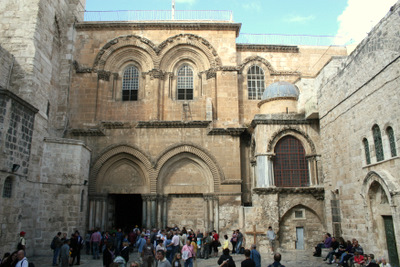 Gaining access to film in the edicule—the small structure marking Jesus’ burial tomb—felt like a minor miracle. But just getting through the front doors was difficult enough. The church is divided into sections for several denominations; the Greek Orthodox, Armenian Orthodox and Roman Catholics are accorded the largest share of the space. Separate filming permits must be acquired from each denomination. I had to run the gauntlet of patriarchate offices in the Old City to pick them all up. The notion that different Christian groups peaceably share one building would be edifying, if only it were true. Despite a rigid “status quo” agreement legislating when and where each group may worship, shameless brawls have erupted between competing factions as recently as 2008. What could change if the beleaguered Christians of the Holy Land learned to pray together? In 2005, a small group of them felt called to find out. After praying together in the Holy Sepulchre, a few monks and lay people decided to start regular times of intercession. The idea quickly caught on:

During Christmas night 2005, the apostolic nuncio of the Vatican to the United Nations strongly encouraged the small group of prayer: “Above all, do not stop praying!” In the spring of 2006, a cardinal present in Jerusalem confirmed his private participation in the prayer initiative, invoking the “urgent necessity of the intercessory prayer”. 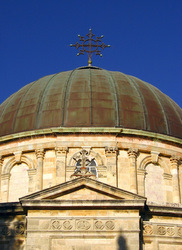 Since then, the organization has gained the support of Catholica Unio Internationalis and the Catholic Near East Welfare Association, two organizations of the Holy See. The first televised event, called the Extraordinary Prayer of All Churches for Reconciliation, Unity and Peace, took place in May 2009. The fifth and most recent event was held at the Ethiopian Orthodox Cathedral, presided by Archbishop Abba Matthias. The TV audience has grown to include Lebanon, France, Italy, Brazil, Portugal, and the Czech Republic—as well as Canada on Salt + Light Television. S+L will air the 5th Extraordinary Prayer this Saturday at 8pm ET / 9pm PT. The broadcast begins with a documentary about the host church. The service is translated into English, though viewers can also pray along by printing the program found here. In the meantime, please take a moment to pray for the three intercessions at the heart of the Extraordinary Prayer:

The 6th Extraordinary Prayer, already scheduled to take place on June 11th, will be the first to be hosted by the Latin-rite Catholic Patriarchate. NOTE: Watch Perspectives on Wednesday night for my phone interview with Véronique Nebel, the coordinator of the Extraordinary Prayer. Perspectives airs at 7 & 11 pm ET and is also streaming on demand from the S+L home page.