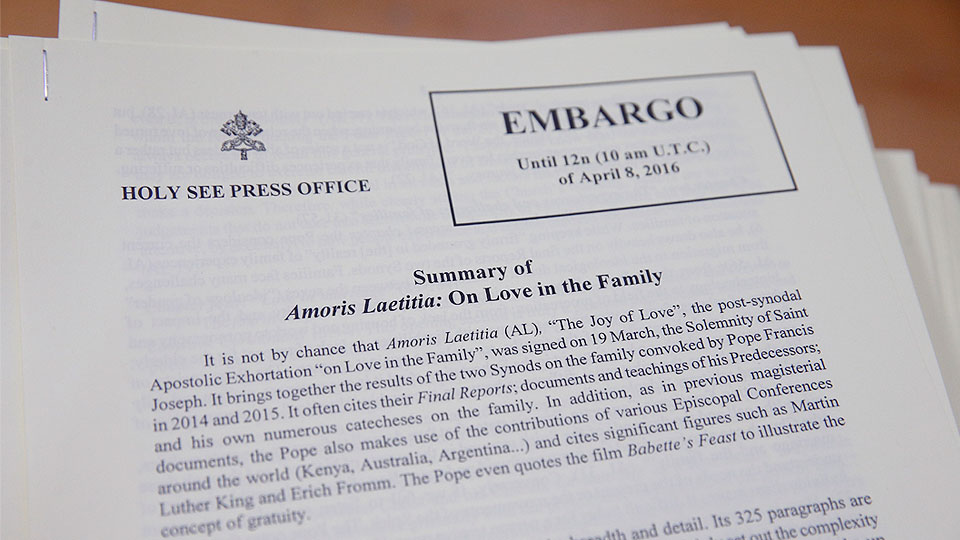 CNS photo/Paul Haring
It was April 8, 2016 when the post-synodal exhortation by Pope Francis Amoris Laetitia was first released at the Vatican. The text summarized the two synods on the family, one in 2014 and the other in 2015, and sought to give a new impulse to the pastoral approach of the Church to family and marriage. It's focus was on the Church as a mother and on the concept of discernment. In the past 12 months, there has been various criticisms and interpretations of the document. Monsignor Pietro Maria Fragnelli, Bishop of Trapani and President of the Italian Bishops Commission for the family, expressed his opinion on that matter. "We can definitely say that a change of mentality has started," he said. "The Pope, at the beginning of the apostolic exhortation, invites us to have a view of the change through a gradual awareness that will surely bring something good in the future. The Pope expects a bond even stronger among Evangelii Gaudium and Amoris Laetitia - between the two documents there is a tension that must be translated into a renewed pastoral action. The idea is always that the Church goes out, closer to families and to the people who need help.” Last November, four cardinals had expressed their doubts, or their 'Dubia' about the much-discussed matter of allowing divorced and remarried people to receive the Eucharist and about the value of moral norms regulating part of the Christian life. Regarding the one year anniversary of Amoris Laetitia, Cardinal Wuerl told Crux: “It is not a list of answers to each individual human issue. The apostolic exhortation calls for a compassionate pastoral approach to many people - married, single, and divorced - who are struggling to face issues in life, the teaching of the Church, and their own desire to reconcile all of this." "The exhortation," Cardinal Wuerl continued, "is a call to compassionate accompaniment in helping all to experience Christ’s love and mercy. In the action of going out, encountering, sharing, and accompanying. Moreover, we also recognize that in the journey, we - ourselves - are also drawing closer to the Lord." Last Saturday, marking the anniversary of the publication, Pope Francis spoke about the next Synod on Youth during the prayer vigil for the 32nd World Youth Day. It will take place in October 2018 and it will focus on young people. Once again, the pope stressed two things: the importance of listening and of not excluding anyone, two keys ideas found in Amoris Laetitia.