The anniversary of the September 11th attacks on the U.S. tends to bring discussion about "the other" to the forefront and as a result brings out either the best or worst of people. This year is no different. New Yorkers, and Americans in general, are caught up in a debate over whether a mosque should be built near Ground Zero while an evangelical minister has called for a massive burning of the Qu'ran - the Muslim holy book. In the midst of these situations born of fear and pain, usually someone steps up and speaks words of reason, goodness and friendship. 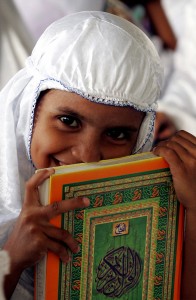 This year that voice comes from a rather unexpected source. So unexpected it probably hasn't made the news in North America. The Cardinal Archbishop of Milan, Dionigi Tettamanzi - better known to many as the author of children's books - called for Milanese authorities to guarantee freedom of religion and practice for Muslims in Milan. There are about 100,000 Muslims in Milan. There is only one mosque in the city, located in suburb of Segrate. One mosque, 100,000 Muslims. One imam has been leading prayer services in a stadium normally used for rock concerts. Others have used an empty theatre, and a gymnasium. The Muslim community has petitioned a series of municipal administrations for permission to build another mosque, but to no avail. The struggle is ongoing, and like everything else in Italy, the tension around the situation ebbs and flows. Just last week, after celebrating a Mass with consecrated members of religious communities, Cardinal Tettamanzi was asked about the situation of Muslims in Milan. Ramadan had brought the issue to forefront again. Cardinal Tettamanzi replied saying, "Milanese civil institutions must guarantee freedom of religion and freedom to practice for all. Muslims have the right before the law to practice their faith. Often politics risks using issue of mosques and ends up putting off finding a solution, raising the level of tension." Milanese Muslims have been promised a solution in the past. That promise, however, had usually been made by politicians seeking re-election to some municipal or provincial post. Inevitably the promising politician would either not be elected, making his promise a moot point, or would be elected and the issue of a mosque would be dropped like a hot potato because of the division it tends to create. Most Italians are still wary of foreigners, especially foreigners with non-Christian religions. The Cardinal's comment about the Muslim community's right to practice their religion set off a wave of counter-comments from Italian politicians. One politician, the federal Minister of the Interior replied to Cardinal Tettamanzi's comment via the national newspapers, declaring, "I'm the minister of the interior, not a mosque builder." It's worth mentioning that the Minister of the Interior belongs to a party called The Northern League, which some consider to be anti-foreigner and anti-immigration. When it comes to quelling the nonsense that can come up at this time of year, the Pontifical Council for Inter-religious Dialogue has found itself in a similar position regarding on the Qu'ran burning being promoted in the U.S. On Wednesday, the council released a statement deploring the proposed burning, saying the September 11th attacks "in fact, cannot be counteracted by an outrageous and grave gesture against a book considered sacred by a religious community. Each religion, with its respective sacred books, places of worship and symbols, has the right to respect and protection." Until that actually happens, until fear loosens its grip, comments like those of Cardinal Tettamanzi and the Pontifical Council for Inter-religious dialogue are small signs of hope amidst the fear and pain. Photo: CNS photo from Reuters