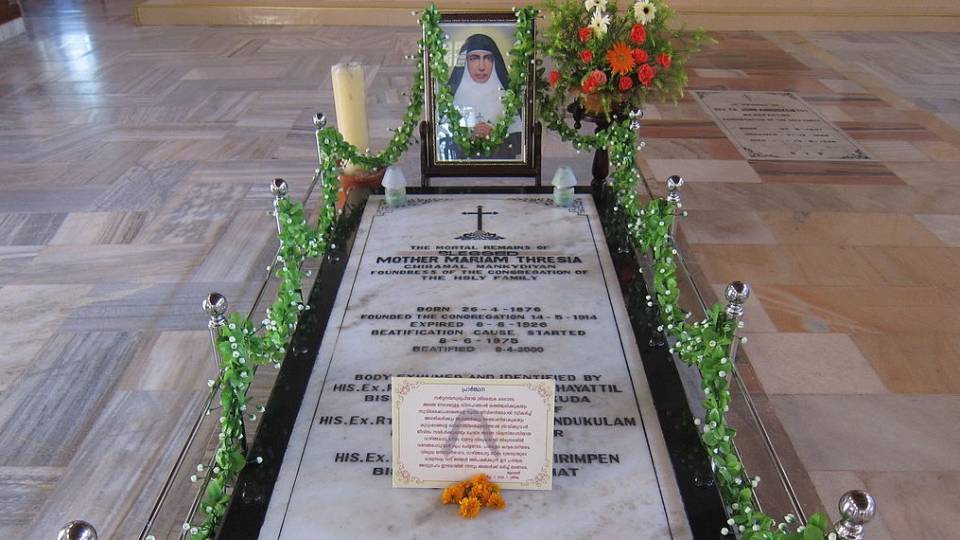 Blessed Mariam Thresia was born on 26 April 1876 as Thresia Mankidiyan in Kerala, India. Raised in the Syro-Malabar Rite of the Catholic Church, her parents named her in honour of St. Teresa of Avila, which would indicate the life of holiness and contemplation that Thresia would achieve. As a young child, she had an intense desire to love God, and she would fast four times a week and pray the Rosary several times daily. Seeing her daughter becoming very thin from all of her fasting, her mother tried without much success to dissuade her from this severe form of piety. Young Thresia’s home life was not easy. When her family fell into poverty, her father and brother often turned to drink to deal with their situation. And sadly, her mother died when Thresia was twelve years old, around the time her elementary school education also ended. So young Thresia began to discern her own vocation in life. She longed to live a life of contemplation, prayer, and penance in solitude, but she soon abandoned this plan, turning instead to a life of service. Continuing to attend her parish church with three companions, she helped to clean it and decorate the sanctuary. In her love for Jesus, she wanted to help the poor, nurse the sick, and comfort the lonely. By being involved in charitable services, she selflessly served the people of her neglected village, inspired by a deep devotion to Christ.

From 1904, Thresia began to call herself Mariam Thresia in response to a vision in which she believed that the Blessed Virgin Mary had asked her to add “Mariam” to her name. With her three companions, she formed a prayer group and an apostolate, visiting the poor and the sick, making no distinctions as to caste or religion. They even broke with the cultural custom of not leaving the house without a man to accompany them, provoking criticism from people in the village. Mariam Thresia was also devoted to the conversion of sinners, for whom she prayed and fasted. She received especial encouragement in this apostolate through her visions of the Holy Family. She believed they guided her in her mission, particularly in the conversion of sinners. In 1903, she requested her bishop’s permission to build a house of solitude for prayer. Instead, he suggested that she join a community called the Congregation of the Franciscan Clarists, but she didn’t think it was her calling. Mariam Thresia went to live with the Carmelite nuns at a convent at Ollur, but she felt that this, too, was not the life God was calling her to. At last, in 1913, the bishop gave her permission to build a house of prayer, where she and her three companions could live like hermits, devoting themselves to austere lives of prayer and penance, while continuing their mission of service to the poor and the sick. This was the founding of her new Congregation of the Holy Family (CHF), in which Mariam Thresia was named the first superior and her companions became posulants. They continued to minister to the sick and the poor, and they also provided for the education of girls and cared for orphaned children. There were many spiritual experiences that characterized the life of Mariam Thresia. She was said to have received the stigmata first in 1905, and it became more visible by 1909. People gathered to watch her lifted high and hanging on her wall in the form of a crucifix every Friday. In 1926, a falling object struck Mariam Thresia’s leg. The wound would not heal, probably due to her diabetes, and on 8 June 1926, she died in Kuzhikkattussery, India, at one of the convents she had founded.

The first miracle attributed to the intercession of Blessed Mariam Thresia was that of Mathew D. Pellissery, who was born in 1956 with congenital club feet. When he was fourteen years old, his family began to fast and pray for a miraculous cure to his deformity. They prayed and fasted for 33 days, and when he awoke on the morning of 21 August 1970, he discovered that his right foot had straightened overnight. His left foot was similarly healed the following year after a further 39 days of fasting and prayer seeking the intercession of Blessed Mariam Thresia. A second miracle was the healing of a baby in 2009. When he was born, Christopher was not expected to survive. He had underdeveloped lungs and three holes in his heart. When he began experiencing respiratory failure, doctors gave up hope for his life. Christopher’s grandmother brought a relic of Blessed Mariam Thresia from her home to the hospital to place beside him, and the family prayed for her intercession. Christopher is now ten years old.

Some possible patronages for this soon-to-be-saint could be: orphans, people struggling with alcoholism, sufferers of leprosy and small pox, women religious, families in poverty, hermits, and diabetics.

This post is part of a series about the saints who will be canonized by Pope Francis on October 13, 2019.