All about Blessed Marguerite Bays - to be canonized October 13 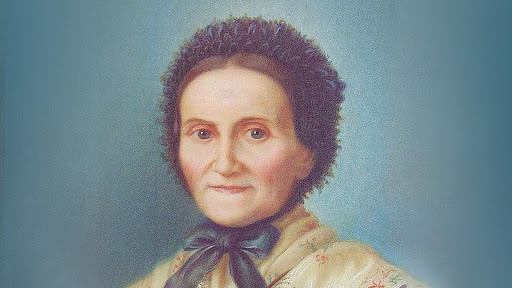 Adapted from a portrait of Blessed Marguerite Bays. Source: Wikimedia Commons.
Last week we learned that five Blesseds would be canonized by the Church on October 13, 2019. The best known of these is Cardinal John Henry Newman (see here and here), the Anglican convert, Oratorian priest, and member of the Oxford Movement. But the four others to become saints by his side have fascinating histories that deserve to be told. Here are the things you should know about Blessed Marguerite Bays, the "simple seamstress" from rural Switzerland.
According to John Paul II...

"Marguerite Bays encourages us to make our existence a path of love. [She] also reminds us of our mission in the world: to proclaim the Gospel in time and against time, especially to the young. She invites us to discover the greatness of the sacraments of the Church. ...She was a simple woman, with an ordinary life ... she did not achieve extraordinary things, and yet her existence was a long, silent march in the way of holiness." - from the Homily of the Beatification Mass of Marguerite Bays, 29 October 1995

Early life Marguerite Bays was born on 8 September 1815 – the same day the Church celebrates the birth of the Blessed Virgin Mary – to a simple farming family in the countryside outside of Fribourg (western Switzerland). She was the second of seven children. The only time she left her village in all her life was to make pilgrimages on foot to various Swiss shrines of Marian devotion. To earn a living she worked as a seamstress and dressmaker, taking in items to mend from different households. Alongside Saint Maria Caridad Brader, she will be the only modern-day (post-1500) canonized person from the country of Switzerland. Marguerite was best known in her village for being a simple, devout, and cheerful woman who didn't draw attention to herself. She strove to maintain a simple and austere life in order to better serve the sick and poor around her, who were often farmers displaced by the ever-increasing mechanization of agricultural labour.  It was her love of service that led to a strong identification with the charism of St. Francis of Assisi. She felt freer to serve God if she was not a member of a religious congregation and instead joined the lay branch of the Franciscan family, the Secular Franciscan Order. Spiritual disciplines Marguerite's spiritual life was deep. After getting up early every day to pray in front of a statue of the Blessed Virgin, she would help her family to milk the cows. Then she headed out to daily Mass and could hardly ever be dissuaded from making the 20-minute walk to church despite inclement weather or illness. Following Mass every day she would join in Adoration of the Blessed Sacrament. After a diagnosis of intestinal cancer at age 35, she was miraculously cured of her ailment on the same day that Pope Pius IX declared the dogma of the Immaculate Conception of the Virgin Mary, December 8, 1853. Other notable features of her life include her role as catechist for the local village children (especially establishing in her parish the "Association for Holy Childhood" for the benefit of foreign missions), giving spiritual encouragement to the founding of a Catholic Swiss newspaper during a time of great strife between civil and religious authorities (known as the "Kulturekampf"), and receiving the stigmata at age 38 after her miraculous bowel cancer cure. In addition to visible stigmata wounds (which, though she sought to hide them, became an object of ever-increasing fascination in her local community), every Friday she experienced the pain of Christ's Passion while entering into a mystical state of ecstasy. She died at at 3:00 pm (the same hour as Jesus) on Friday, 27 June 1879. She was 63 years old. Her bodily remains are located in the Church of Siviriez, and her lifelong home is now a pilgrimage site. Her miracles The first miracle attributed to Marguerite occurred in March 1940. On an Easter Monday hike four Catholics ascended the Dent-de-Lys mountain, part of the Bernese alps in the Fribourg region. Though the weather was good and sunny, the terrain was slippery, and during their vertical descent three of the mountaineers (all roped together)  plunged to their deaths. The fourth was saved because the section of rope connecting him to the others was miraculously broken. He says he prayed for the intercession of Marguerite Bays during the accident. The second miracle, the one leading to Blessed Marguerite's imminent canonization, involved a Swiss toddler in 1998. At the tender age of two years old she fell under the wheels of a moving tractor. Her grandfather witnessed the accident unfolding and prayed to Marguerite under the affectionate title of "Goton de La Pierraz" ("Goton" is a nickname for Marguerite and "La Pierraz" the name of her home region) and the girl got up unharmed. A team of medical advisers investigated the circumstances of the accident and deemed it "medically inexplicable" that the girl could have survived an accident that by all accounts should have crushed her, let alone remained completely unscathed. Patron saint? Some fitting patronages for soon-to-be Saint Marguerite Bays could be catechists, those suffering from intestinal cancer or digestive issues  (IBS, Crohn's, etc), Third Order Franciscans, seamstresses, dressmakers/fashion designers, lay people, and Switzerland.

To learn more about Marguerite Bays in English (as many of the resources about her are in her native French), you can read excerpts from this e-book, available for free on Google Books.