All about Blessed Giuseppina Vannini - to be canonized October 13 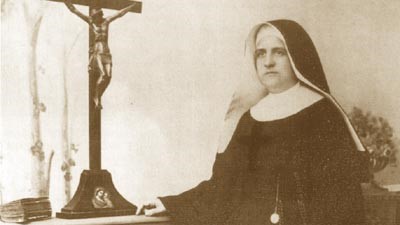 Giuseppina Vannini was born Giuditta Vannini on 7 July 1859 in Rome, as the second child of Angelo Vannini and Annunziata Papi. Her father died in 1863 and her mother in 1866, so seven-year-old Giuditta and her two siblings were orphaned when they were very young. The children were separated after the death of their parents, with Giuditta going to the Torlonia orphanage under the care of the Vincentian sisters. Her sister went to the Sisters of Saint Joseph, and their brother went to a maternal uncle. Originally interested in becoming a kindergarten teacher, Giuditta eventually decided on religious life.

She decided to enter the novitiate of the Daughters of Charity in Siena, a congregation of Vincentian sisters. Unfortunately, she had to return to Rome for health reasons in 1887 but decided to resume her religious formation in 1888. Still unsure of where she belonged, it was in December 1891 that Giuditta met Father Luigi Tezza at a spiritual retreat when she sought his advice in a confessional. Fr. Tezza was interested in forming an all-female religious congregation dedicated to caring for the sick. After several weeks of discernment, Giuditta accepted Fr. Tezza’s offer, and in March of 1892, she and two companions received the scapular and religious habit of Camillian tertiaries. She took “Giuseppina” as her religious name and was made the Superior General of the Daughters of Saint Camillus on 8 December 1895, the congregation she founded with Fr. Tezza. The Congregation began to grow, despite its poverty, with new communities being opened in Cremona, Mesagne, and Brindisi at the end of the 19th century. It was difficult, however, to get ecclesiastical approval for the Daughters of Saint Camillus, as Pope Leo XIII had decided not to allow the foundation of new religious communities. Fr. Tezza’s relationship to the women in the community became the subject of malign interpretation, but he refused to defend himself against the allegations. He left Rome and went to in Lima, Peru, where he remained for the rest of his life. Mother Giuseppina was now responsible for the Daughters of Saint Camillus community, but she was equipped with strength and was confident in the help of God. The community spread throughout the world, having houses in France, Argentina, and Belgium. The congregation finally gained official approval in 1909. By 1910, Mother Guiseppina’s health began to fail when she was struck by serious heart disease, and in February 1911, she died at the age of 51. Her body was originally buried in Verano Cemetery in Rome, but in 1932, her remains were exhumed and interred in the church of the mother house of the Daughters of Saint Camillus. Her remains were again transferred in 1976 to the chapel of the new general house in Grottaferrata.

Olga Nuñez of the Diocese of Buenos Aires was suffering from paralyzing melanoma, and medical treatment proved to be ineffective. The Daughters of Saint Camillus served in the hospital where she was being treated and placed a relic of Mother Giuseppina on her hospital bed, while praying a novena to ask for the intercession of their founder. Nuñez began to improve until she was cured completely. The second miracle involved a construction worker in Sinop, Brazil, named Arno Celson Klauck who fell three floors down an elevator shaft while placing wooden beams. He spontaneously invoked the help of Mother Giuseppina as he fell, and he was found unscathed except for a few bruises.

Some possible areas over which Blessed Giuseppina could have patronage include: people with heart conditions, orphans, sufferers from any kind of illness, sick parents, teachers, young children, hospitals, and women religious.

This post is part of a series about the saints who will be canonized by Pope Francis on October 13, 2019.