A Pope of Dialogue 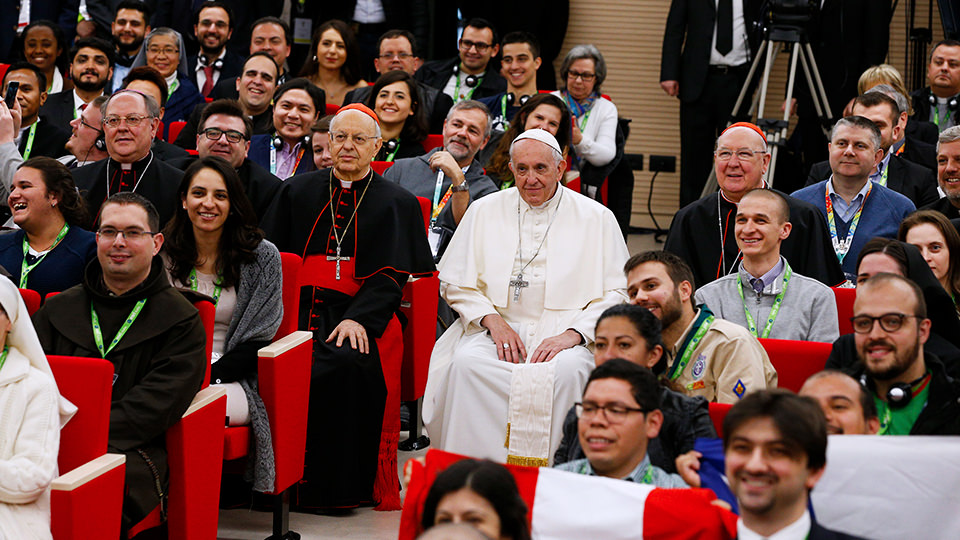 by Alex MacDonald Since the early days of his papacy, Pope Francis has carved out a distinct style of communication. The pastoral narrative that Pope Francis has been developing is something that I have been able to continually find a great sense of meaning in. I began to more deeply engage with the Pope’s discourse when I was trying to develop more coherent and authentic ideas and ideals. And indeed, as a product of my time, I realize that I, like many of my millennial counterparts, am searching for authenticity. We yearn for a deep meaning in life, wish to feel useful in our pursuits, want to employ our talents in meaningful worthwhile fields, and desire to see the change that we are pursuing. To many this outlook may be idealistic, and to a certain degree it is. But I think the Pope sees in youth a heartfelt desire to disturb the status quo of indifference and idleness, to be dynamic and daring in achieving our ideals. Francis employs a rhetoric, a dialogue, a narrative, that sidesteps the usual ideological baggage of our time and instead rallies people of good will which avidly strive for their ideals. In this way, I personally, and I think younger people at large, have been able to connect with Francis: he articulates our ideals in a concrete way, he inspires us to keep fighting the status quo. And I would like to believe that he draws inspiration from the vision and enthusiasm of young people who have become disenchanted with the senselessness of mainstream ideological battles and culture wars. In this way, I think the youth and the Pope are forming a relationship in which each other's visions, ideals, and yearnings for change are mutually enforced and refined. The Pope’s words, demeanour, and actions have energized these youthful ideals. What I am describing certainly speaks to young people who were already looking to the Catholic Church for greater meaning, but the effect of Francis on young people who are lukewarm or far from the reach of the Church, has also been intimately noticeable. The unique character and approach of Francis has naturally sparked many conversations that would have either been impossible or practically unthinkable before his papacy. What I am referring to is how the dynamism and audacity of the Pope has not only captivated Catholics but a diversity of people. For me this has been most clearly manifested in how Francis has framed his discussions of social issues within the notion of a 'consistent life ethic'. That is, to be pro-life is to compassionately care about migrants, the destitute, those without opportunity, and those subject to modern forms of slavery. This consistent life ethic framework is a much more accessible and indeed attractive way to talk about a 'culture of life' and how our society, and even some Christians of good will, lack understanding of that deeper culture and respect for the dignity of all people, truly from conception to natural death. Thus, in a concrete way, each of those unexpected comments or actions by the Pope regarding these issues provided new opportunities for me to dialogue with other young people, often at their own initiative. I attribute these encounters to the Pope’s uncompromising discourse of love. In a time where genuine dialogue is becoming more and more difficult, especially on university campuses, Pope Francis not only sparks conversation through his unexpected words or deeds, but he also demonstrates how to effectively carry out the ensuing conversation; embracing others’ differences, listening intently, exercising empathy, and when your turn comes to speak to do so with courage, passion and a love for the other – and all with a spirit or civility and naturalness. This is the practical living out of what Francis has expressed as being a person of ‘incomplete thought, of open thought’. For a young Catholic in university these unexpected experiences are interactions with the subtle periphery of the first world. These experiences are invitations to open up one’s heart and mind to those that you thought you’d never be able to connect with, that were too deep in ideological partisanship to reason with or even befriend. The example and witness of Pope Francis has encouraged me to reassess those that I have cast to the side, those that I have forced to the periphery in my present environment and inspired me to put myself at their service. To interact with the modern periphery is to develop a common ground with those we prefer to forget about or avoid due to the perception of different values or competing worldviews. Equally as important, the Pope has struck a chord with those, who perhaps far from the Church, have nonetheless been searching for authenticity and a deeper meaning to their life which seems so absent in our 21st century society

Alex MacDonald is a native of the Greater Toronto Area. He studies political science and History at McGill University. He has a passion for international politics and Catholic social thought.