After the storm, the explanation 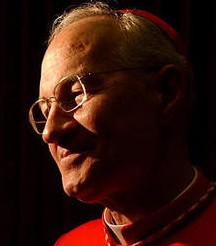 In order to rush to a television studio near the Vatican, Cardinal Marc Ouellet never likely had to get off a plane as quickly as this afternoon. The Quebec media had been running after him for well over 24 hours. If you are not from Quebec, maybe you didn’t hear what was the top story throughout la belle province yesterday: an open letter by the Archbishop of Quebec City to the province’s Catholics. An English translation of the letter is available on The Catholic Register website.
Titled “À la recherche de la fierté québécoise” (Searching for Quebec’s pride), the letter includes a mea culpa in which the Primate of the Catholic Church in Canada asks for forgiveness for all the Quebec Church’s wrongdoings prior to 1960. The Cardinal asks the Catholics of Quebec to help him: “I am inviting pastors and the faithful to help me seek the manner with which to recognize our mistakes and deficiencies, so as to help our society reconcile with its Christian past.” A dialogue thus appears to be opened and the idea of finding the sources of Quebec society’s soul and religious identity is launched.In order to achieve this, Cardinal Ouellet suggests that the season of Lent 2008 be a special time of repentance and reconciliation. Quebecers are certainly capable of repenting and reconciling. The Cardinal is suggesting this as a special preparation for welcoming the graces from next year’s Eucharistic Congress. Congress or not, we–the Quebec society–need reconciliation more than ever!Those in Quebec who wish for His Eminence, and along with him many Quebec Catholics, to stay in his church and preach only inside its walls will wait for a long time. The media put it on the top of yesterday’s stories and collected opinions from everyone and no one on the matter. Indeed, it was a very good day for the press in Quebec. How can we explain such an interest? Despite a radical secularization preached by some, there is still in Quebec respect for individuals who stand up and say: “Wait a minute…”The Quebec Assembly of Catholic Bishops (AECQ) was quick to say that Ouellet’s letter was a personal one. In fact, a bishop has every right to pronounce himself on matters pertaining to the people he serves. There is, however, a certain discomfort at the AECQ and the bishops of Quebec will have no other choice but to address it. There, too, the dialogue should be an open one.There’s always in the Church this debate to find the best ways to announce the gospel. Pope Benedict XVI has even called a synod of bishops next year to discuss the issue (The Word of God in the Life and Mission of the Church). The bishops of Quebec were for a long time in favour of an “underground approach,” i.e. that we had to mingle with the people, be one of them, in order to evangelise them. The Church adapted some of her ways in order to get the attention of people. The priorities from 30 years ago are not necessarily those of today. It is by looking back at the history of our society and discerning the signs of the Holy Spirit in our time that the Church can proclaim her message. To achieve this, it is the same Spirit who continues to call men and women who have the boldness and the passion to announce the Gospel and make the person of Christ known.What is happening in Quebec right now is complex and observers from the outside should not jump to any quick conclusion. Cardinal Ouellet wrote his letter to follow up on many comments and critiques he received after presenting a paper to the Bouchard-Taylor commission on reasonable accommodation. There is a true climate of dialogue that is emerging in Quebec due in part to this commission. And the Catholic Church is part of it.From Rome this afternoon, the cardinal explained his motivation for writing the letter: “It is a gesture of peace, an effort to build the future by removing the obstacles that impede the comprehension, and perhaps the deepening, of our Christian values, of our spiritual values. We need that a lot in Quebec and I wrote this letter with that in mind.”Tomorrow : the future of Catholic education in Quebec.