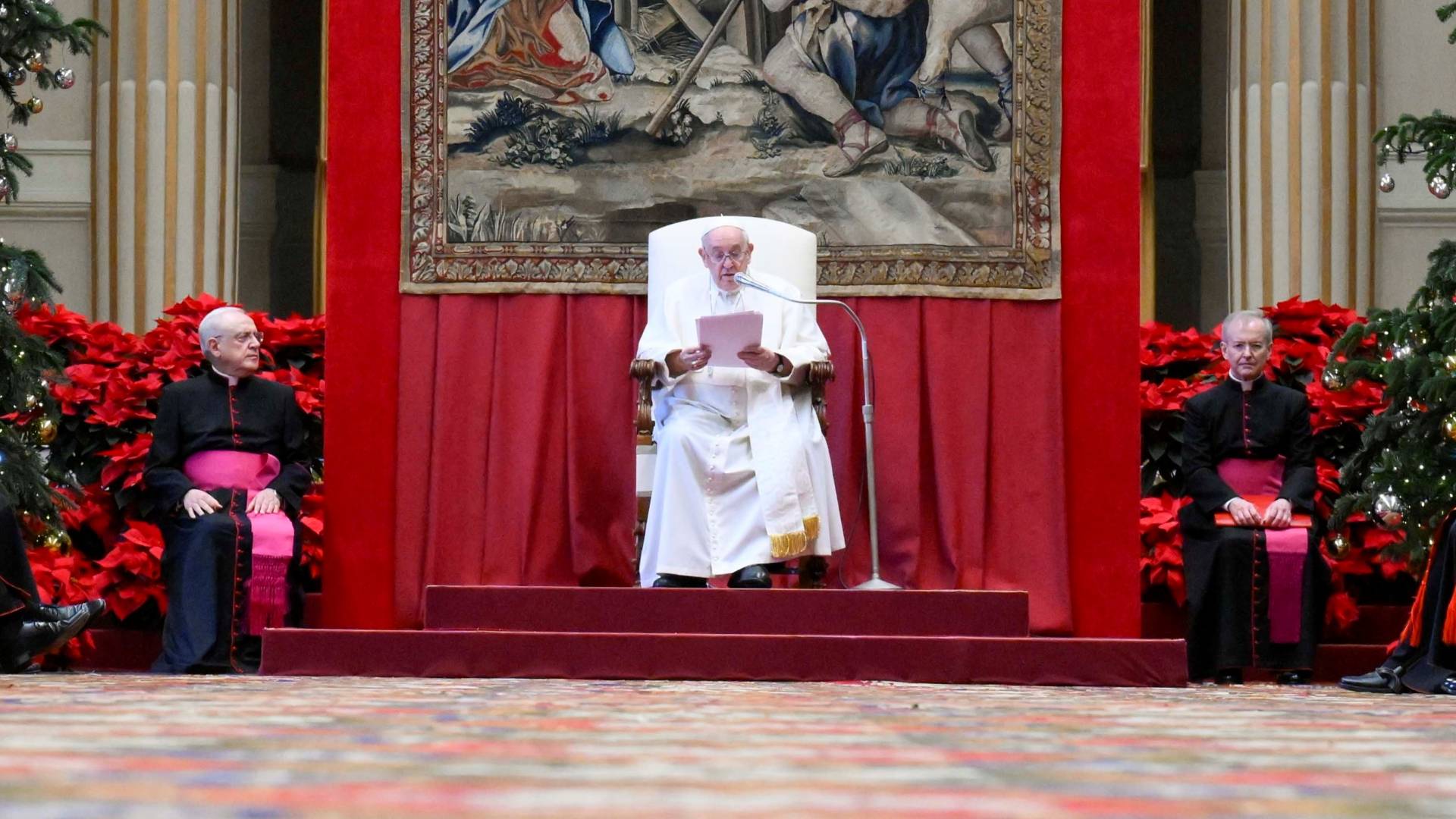 Pope Francis, seated under a tapestry of the Nativity, speaks to cardinals and top officials of the Roman Curia in the Vatican's Hall of Blessings Dec. 22, 2022. (CNS photo/Vatican Media)

In the Benediction Hall on 22 December, 2022, Pope Francis exhorted the Roman Curia to practice "vigilance...in the service of the Holy See, at the heart of the Church." Reflecting on St. Paul's Epistle to the Ephesians, he told them that "kindliness, mercy and forgiveness are our medicine for building peace." 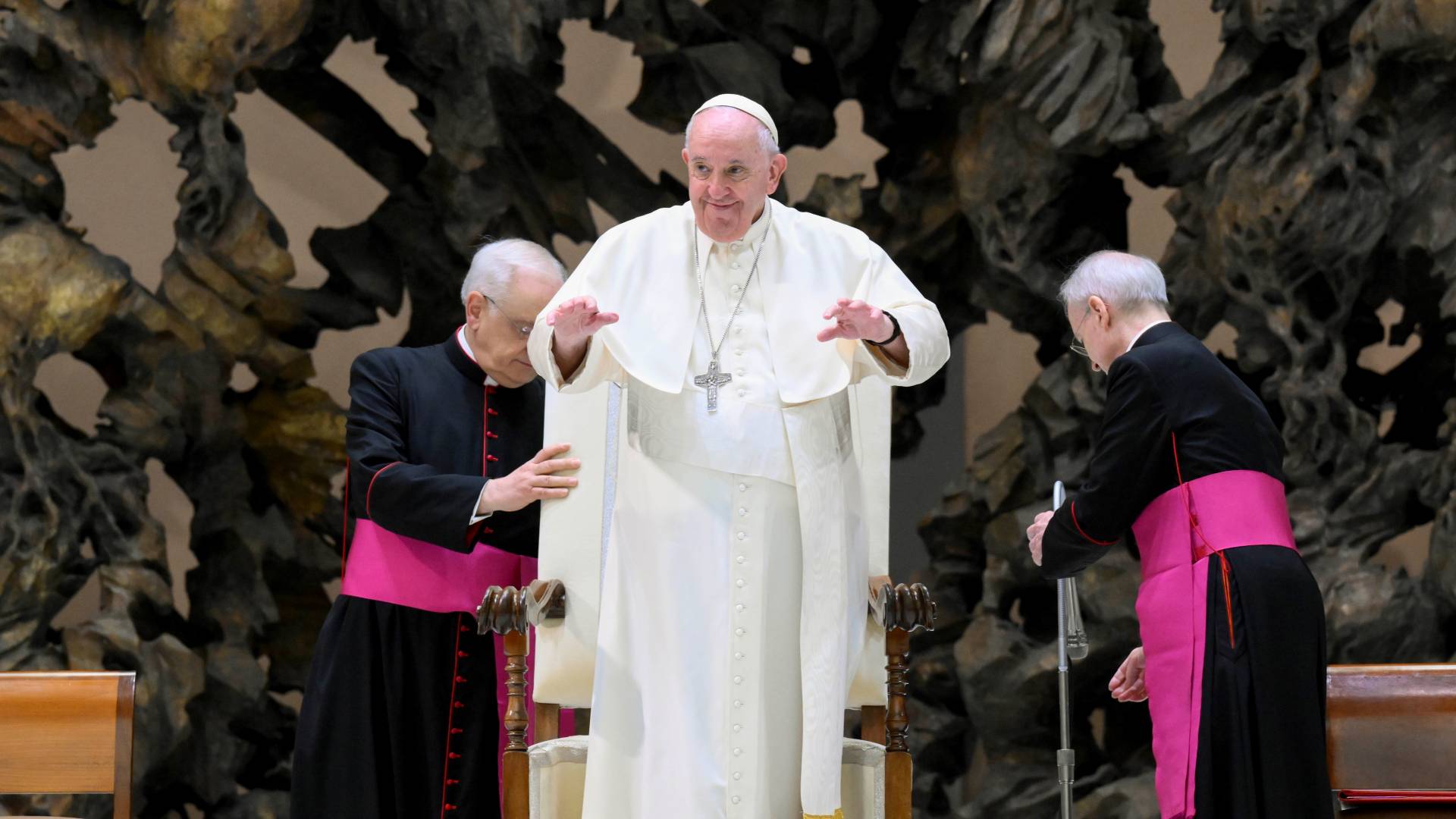 Pope Francis motions for people to sit down at the beginning of a Christmas audience with Vatican employees Dec. 22, 2022, in the Vatican audience hall. (CNS photo/Vatican Media)
6. I would like to say one last word about the subject of peace. Among the titles that the prophet Isaiah gives the Messiah is that of “Prince of Peace.” (9:5) Never as at this time have we felt so great a desire for peace. I think of war-torn Ukraine, but also of the many ongoing conflicts in different parts of our world. War and violence are always a catastrophe. Religion must not lend itself to fueling conflicts. The Gospel is always a Gospel of peace, and in the name of no God can one declare a war to be “holy.” Wherever death, division, conflict, and innocent suffering reign, there we can recognize only the crucified Jesus. At this time, it is precisely to those who are suffering most greatly that I would like our thoughts to turn. We can be helped by the words of Dietrich Bonhoeffer, who from his prison cell wrote: “Viewed from a Christian perspective, Christmas in a prison cell can, of course, hardly be considered particularly problematic. Most likely, many of those in this building will celebrate a more meaningful and authentic Christmas than in places where it is celebrated in name only. That misery, sorrow, poverty, loneliness, helplessness and guilt mean something quite different in the eyes of God than according to human judgement; that God turns towards the very places from which men turn away; that Christ was born in a stable because there was no room for him in the inn – a prisoner grasps this better than others, and for him this is truly good news.” (Letters and Papers from Prison, Letter to his Parents, 17 December 1943) 7. Dear brothers and dear sisters, the culture of peace is not built up solely between peoples and nations. It begins in the heart of every one of us. Anguished as we are by the spread of wars and violence, we can and must make our own contribution to peace by striving to uproot from our hearts all hatred and resentment towards the brothers and sisters with whom we live. In the Letter to the Ephesians, we read these words, which are also found in the Office of Compline: “Put away from you all bitterness and wrath and anger and wrangling and slander, together with all malice, and be kind to one another, tenderhearted, forgiving one another, as God in Christ has forgiven you.” (4:31-32) Let us ask ourselves: How much bitterness do we have in our hearts? What is feeding it? What is the source of the indignation that so often creates distances between us and fuels anger and resentment? Why is it that backbiting in all its forms becomes our only way of talking about the things around us? If we truly want the din of war to cease and give way to peace, then each of us ought to begin with himself or herself. Saint Paul clearly tells us that kindliness, mercy and forgiveness are our medicine for building peace. Kindliness means always choosing goodness in our way of relating with one another. Besides the violence of arms, there is also verbal violence, psychological violence, the violence of the abuse of power, and the hidden violence of gossip, all of which are so deeply harmful and destructive. In the presence of the Prince of Peace who comes into the world, let us lay aside all weapons of every kind. May none of us profit from his or her position and role in order to demean others. Mercy means accepting the fact that others also have their limits. Here too, it is fair to accept that individuals and institutions, precisely because they are human, are also limited. A Church that is pure and for the pure is only a return to the heresy of Catharism. Were that the case, the Gospel and the Bible as a whole would not have told us of limitations and shortcomings of many of those whom today we acknowledge as saints. Finally, forgiveness means always giving others a second chance, in the realization that we become saints by fits and starts. God does this with every one of us; he keeps forgiving us; he keeps putting us back on our feet; he always gives us another chance. We ought to do the same. Brothers and sisters, God never tires of forgiving; we are the ones who tire of asking forgiveness. For every war to end, forgiveness is required. Otherwise, justice becomes vengeance, and love is seen only as a form of weakness. God became a Child, and that Child, once grown, let himself be nailed on a cross. There is nothing weaker than one who is crucified, yet that weakness became the demonstration of God’s supreme power. In forgiveness, God’s power is always at work. May gratitude, conversion, and peace thus be the gifts of this Christmas. I wish you all a happy Christmas! And once again, I ask you, please, not to forget to pray for me. Thank you! Text courtesy of Libreria Editrice Vaticana