A Winner Despite the Losses 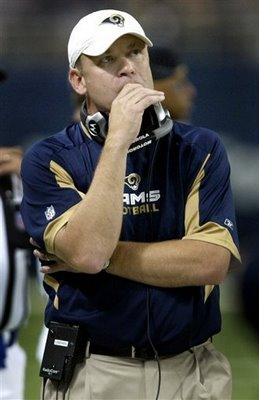 When Scott Linehan was hired to be the head coach of the St. Louis Rams in January 2006, it was his crowning achievement after years toiling as an assistant coach in both the NFL and the college ranks. He had reached the pinnacle of his profession at the tender age of 43. Now the hopes of the city of St. Louis and all Rams fans rested on his shoulders. Expectations are always high in the National Football League where you're loved if you win, and run out of town in the dead of the night if you fail. Linehan was blessed to have two advantages: faith and family. A devout Catholic, Scott had not missed Sunday mass since high school. He also had the distinction of being the brother-in-law of Jesus (Passion of the Christ actor James Caviezel). Many reporters in St. Louis commented how surprisingly kind, deferential and respectful Linehan seemed. A far cry from the rough and tumble style of many other coaches in the testosterone driven world of the NFL. No doubt, Linehan's faith and low key personality would help sustain him during the inevitable ups and downs of coaching in the NFL.
He never could have imagined just how much support he would need. After finishing his first season as head coach with an 8-8 record, many observers predicted a Rams playoff run in 2007. Instead the team suffered through its worst season in more than a decade. The team lost its first 8 games, oftentimes in blowout losses that severely tested the mental toughness of Linehan and the Rams. On several occasions star players openly challenged Linehan on the sidelines, and local papers and radio stations were inundated with calls for the coach to be fired. Due to the rash of injuries that plagued the Rams in 2007, Linehan was given a pass by Rams management and brought back for another chance in 2008. He worked diligently all off-season to strengthen the roster and improve his relationship with the players. However, the first four weeks of the 2008 season proved to be Scott Linehan's "Garden of Gethsemane." The Rams played terribly, running up double digit losses the first four weeks of the season, angering their fans and becoming the butt of jokes around the league. The calls for Linehan's dismissal reached a fever pitch. Players openly questioned his authority, and it became clear that he had lost the locker room. This past Monday Linehan was dismissed by Rams owner Chip Rosenbloom, hours after a disheartening loss to the Buffalo Bills where the Rams blew a halftime lead and were outscored 25-0 in the fourth quarter. Linehan made one final request: that he be allowed to address his players one last time. Management was not keen on the idea, but they finally relented. At 11:00 am on Monday morning Linehan spoke to the assembled players, many of whom had just learned of his firing moments before. The players who sat and listened to Linehan’s final address included many who turned their backs on him, a few had embarrassed him with their open defiance of his leadership. Did Linehan give them a tongue lashing? One final burst of anger or last ditch effort to settle old scores? No. Instead, he told the Rams they were winners, they may not be playing like it now, but they are winners and that he will always be cheering for them. He also told the players if they ever find themselves in need of anything that he would be there for them and that he was just one phone call away. Impressive words from a man who is obviously motivated by strength of character that stems from a personal relationship with Jesus. Scott Linehan coached the Rams to an 11-25 record in his two plus season with the team. He was run out of town, cursed by players, chastised by the media and abandoned by some of the very men he hired to be his assistant coaches. Yet, as he looks towards his future he should never be considered a loser. In the game of life the words he spoke to the Rams players after his dismissal mean far more than any victory on game day. Scott Linehan proved to me that he is a winner, despite all the losses.