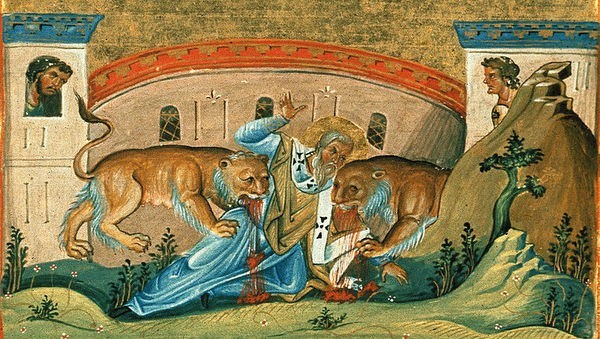 I told the Lord, 'You take care of me. But if your will is that I die or that they do something to me, I ask you just one favor: that it doesn't hurt because I am a big wimp when it comes to physical pain. Pope Francis when asked about people's concerns for his safety

When the Pope admitted this week that he is a wimp when it came to physical pain, I breathed a sigh of relief. Phew! Even the Pope struggles with this issue. Yeah, I’m a wimp. I admit it. I've read the lives of the early Christian martyrs, The Jesuit Relations, even stories of the Christians being persecuted around the globe at this very moment, and the mere thought of suffering like that fills me with horror and the fear that I’m going buckle when put to the test. This realization also doubles my awe at those who have embraced their persecution.  For example, when the Nazi’s came to take St Edith Stein ( Teresa Benedicta of the Cross) she didn’t resist.  All she said was, “Come Rosa, let us go for Our People”. She knew what lay ahead, but she embraced her suffering with grace and serenity. How does one get to that point? How am I going to learn to embrace suffering with grace? Well, I got a clue this past week. I attended a talk on St Edith Stein’s prayer life, hosted by the Association of Hebrew Catholics Toronto. The speaker Mark Neugebauer, like Edith Stein was born Jewish and later became a believer. By way of relating St Edith's experience to us, Mark also shared some anecdotes from his own life. His family had been in Auschwitz - his father and uncle. Here’s what’s struck me though, he said that one came out of the experience hating God and the other loving God even more.The difference between the two? The one who had shaky faith before he went into Auschwitz ended up hating God. That made me think. In other words, the faith of the one who believed was strengthened in the face of persecution and suffering. Instead of being broken, the believer was sustained and strengthened. The whole thing seems counter-intuitive, but the more I mulled this over, the more it seemed to explain how saints like Maximilian Kolbe could shine so brightly in a concentration camp. So Pope Francis may be convinced he’s a wimp, but I'd be willing to bet that his Goliath-like faith will sustain him through the worst of trials.  As for myself, well, let’s just say that after reflecting on these stories I am more determined than ever to be that saint, but I’m not quite ready for the rack just yet.