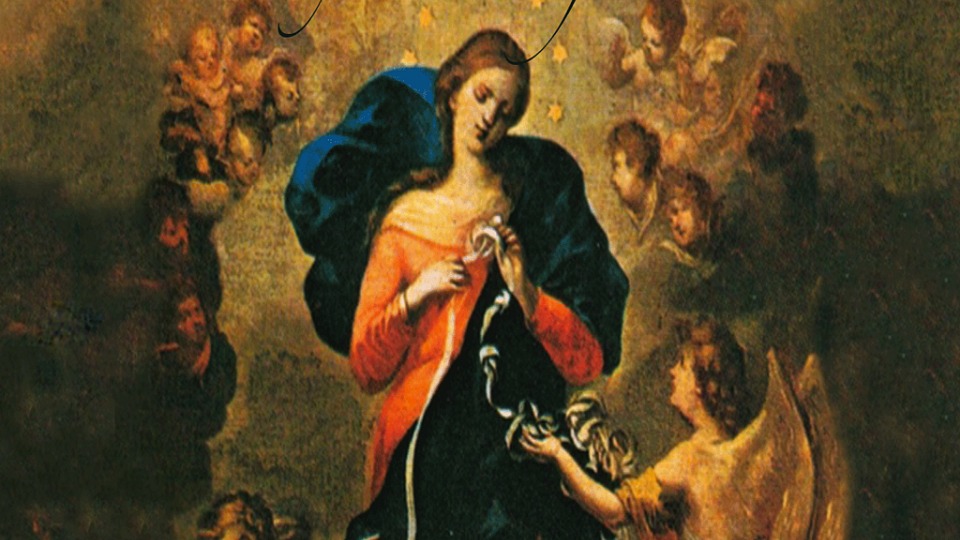 Like most other people, I had no idea who Archbishop Bergoglio was. When he stepped out on the balcony to make himself known to the world as Pope Francis, there was scant little I could've told anyone about him. It was as if he was a man without a past. An air of mystery surrounded his initially disarming presence. For most Catholics, especially those uninvolved with the people and workings of the Church hierarchy, it seemed as if Bergoglio had come to the papacy as somewhat of a blank slate. This is, of course, a rather silly idea. We know that for popes and parishioners alike, the past is always prologue – and often written in bold type. In the coming weeks and months, aspects of his character and his past life trickled out: his works as Archbishop of Buenos Aires, his love of soccer and dancing, his time as a nightclub bouncer. Yet one thing caught my attention more than anything else: his personal devotion to Mary, Undoer of Knots. Pope Francis' devotion began in the 1980s, when he was studying in Germany. He was entranced by the Baroque painting Wallfahrtsbild (Johann Georg Melchior Schmidtner, 1625-1707) which he saw hanging in St. Peter am Perlach in Augsburg, Bavaria. After encountering it, he brought the devotion back with him to Buenos Aires. From there it proliferated throughout Latin America. He was so enthralled with the Marian image that he had it engraved on a chalice which he gave as a gift to Pope Benedict. Pope Francis himself was presented with a replica of that same chalice on his first anniversary as pope. Interestingly, my own devotion to Mary, Undoer of Knots began during Pope Benedict's papacy. A friend had passed along a prayer card and suggested that my wife and I do a novena for an urgent need we had. For me, the most striking thing about the prayer was the image on the front of the card, which I reflected on each day of the novena. There was something so real, so tangible and so modern about the Blessed Mother's hands diligently and gracefully working over the unruly, knotted rope. The scene always reminded me of a little boy, who, having lazily slipped his feet out of his shoes without untying the laces, would come to his mother hours later, pleading with her to undo them (and quickly!) so he could go outside again to play. More than anything, the painting spoke a truth about the unknowable ramifications of sin and how we desperately need an intercessor to clean up all the horrible messes we make! On this fourth anniversary of Pope Francis' papacy, I'm thankful for a pope who recognizes the power of popular devotion to Mary. I'm thankful for a pope who recognizes human frailty, and the grace which comes from owning up to our mistakes. Pope Francis understands how easy it is to create unintended knots from words and deeds, and how vital it is to rely on God's mercy in order to unbind ourselves from their repercussions. Most importantly, I'm thankful for Pope Francis and all the popes in my lifetime who have shown me that even the thickest, gnarliest rope can never restrain the redeeming power of the Cross. In order to gain it, all we have to do is ask for a helping hand.