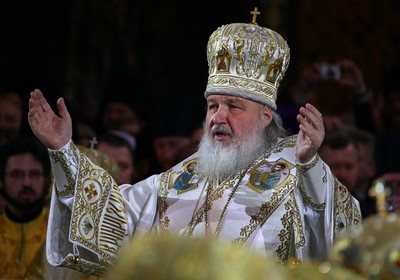 On February 1st, Metropolitan Kirill of Smolensk and Kaliningrad was enthroned as the new leader of the 150-million member Russian Orthodox Church.
The 62-year old Kirill was elected last week by a council made up of 700 priests, monks, and laypeople representing the dioceses and foreign missions of the Russian Orthodox Church from more than 60 countries. He succeeds Alexis II who died December 5th. For the past 20 years, Metropolitan Kirill has been in charge of that Church’s ecumenical relations. Though in the past he has criticized the presence of the Roman Catholic Church in Russia, it is hoped that relations will improve between the Russian Orthodox and Catholic Churches. Despite differences with the Vatican, he has stated the two churches have permanent, "always-open channels of communication." To read Pope Benedict XVI's telegram Patriarch Kirill, click HERE. As the Holy Father offers his prayers to the new Patriarch, we too should make the effort to pray not only for him and for the Russian Church, but to pray for Christian unity -- so that we may be one in complete unity (John 17:21-23). It's an intention that's easy to remember in late January, during the Week of Prayer for Christian Unity, but it's an intention that we should remember regularly. While still on the topic of prayer intentions, Pope Benedict's intentions to keep in your prayers for February are centred around his seven-day trip to Africa. The Pontiff will visit Angola and Cameroon March 17th-23rd. The Holy Father's general intention is: That the pastors of the Church may always be docile to the action of the Holy Spirit in their teaching and in their service to God's people. His Apostolic Intention is: That the Church in Africa may find adequate ways and means to promote reconciliation, justice and peace efficaciously, according to the indications of the Second Special Assembly for Africa of the Synod of Bishops. - Photo from: Getty Images by AFP/Getty Images