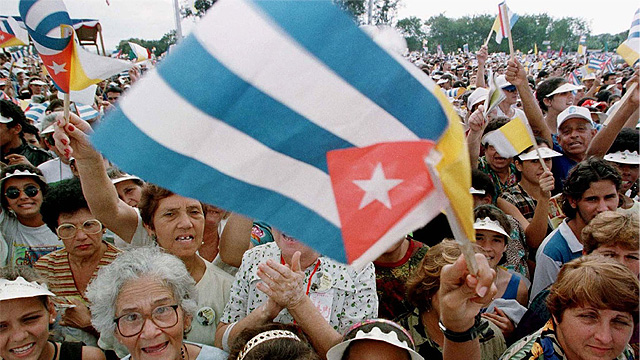 With the highly anticipated Papal visit to the United States this fall creeping ever closer, word has come out of the Vatican of a possible detour on the pope’s flight home to Rome. The Holy See Press Office has confirmed that Pope Francis is considering a visit to Cuba to cap off his first visit to North America as Pontiff.
This is an enormous development that would add to an already historic trip for the Holy Father. Who better than a bridge-builder, a pastor, to help the healing process of a half-century of mistrust and division? Besides the obvious significance of a papal trip to Cuba, the specific timing and nature of the trip make it worth examining.
It is no secret that the Holy See and the pope in particular played a significant role in facilitating the talks that thawed relations between the United States and Cuba. Whether it be hosting secret negotiations or acting as intermediary, the governance of the Church played a critical role in bringing the Cold War adversaries to the negotiating table. It should then come as no surprise that Pope Francis has taken such a vested interest in the Communist island nation. That said he is not the only recent Pontiff to do so. Both Saint John Paul II and Pope Emeritus Benedict XVI made visits to the country during their respective pontificates, developing a dialogue and rapport that at one time would have been unthinkable.
Perhaps one of the most significant symbols of a Papal trip Cuba, is the actual flight itself. The embargo that has for decades isolated Cuba, has excluded the possibility of direct flights to the island from the United States. With the potential for a Philadelphia – Havana flight path for the Papal jet on the table, it is a visible sign of changing attitudes of the day. While the pope’s travel to sovereign countries is not constrained by American foreign policy, such a trip would have had divisive political ramifications just a decade ago.
Lastly, what perhaps tells of the seriousness of the pope’s desires to facilitate a trip to Cuba is that up until now, both the Vatican and Francis had for months made clear that the US visit would be restricted to Washington, New York and Philadelphia. There had long been speculation of other stops for the Holy Father, including California for the canonization of Blessed Junipero Serra, Marian Shrines in the mid-west or even a stop at the US- Mexico border, followed by a stop in Mexico City. This latest development puts aside the suggestion that it would be too much for the pope to extend his visit beyond a week. With the momentum and political willingness to open the doors between the United States and Cuba, it appears the Vatican is willing to pull out all the stops to get the job done.
Timing is critical variable in the world of politics. It is a luxury seldom enjoyed by those who govern or operate on the world stage. When an opportunity such as the one that has presented itself appears, it would be a grave error not to capitalize on and seize it. The timing is right, the conditions are ripe, and the time to take advantage and affect change in Cuba is now.

Stefan Slovak is the host and producer of Perspectives Daily, Salt + Light's daily update show.  His column focuses and expands on the stories outlined on our network, with a particular focus on international affairs and the relationship between Church and state.