A Moment of Thanks 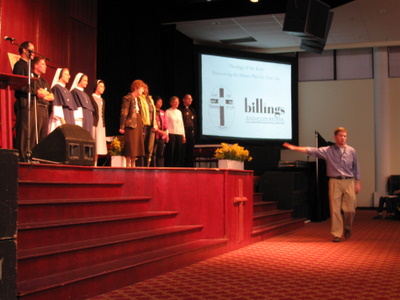 Just over a week ago Christopher West was in Toronto speaking about Theology of the Body. It was his first time speaking in here, and for many of us who have read his work and admire and appreciate his ministry it was a very special two days of talks about John Paul II's magnificent and revolutionary work.
One of the most powerful moments of the weekend was when Christopher called on stage the priests and religious who were in attendance. With a little coaxing, members of the the Companions of the Cross, Sisters of Life, and Madonna House Apostolate gathered on stage, some one thousand people looking at them. Christopher was speaking about celibacy for the sake of the kingdom. He had been explaining how these people share the same vocation to love as those who marry, but it is lived out in a different way. They are celibate in anticipation of the kingdom, they devote "themselves entirely to the marriage of Christ and the Church" proclaiming that "the kingdom of God is here." He built on the point that ultimately we are all striving for a union with God -- the one union that satisfies, the union we hope to achieve when our earthly life comes to an end. These men and women are witnesses of this union. He was not saying that these people were better than the rest of us, he was recognizing their sacrifice to forgo something that is good here on earth (marriage) and to focus on the eternal union with God. To see them in front of us -- some of whom I am blessed to consider as friends -- added extra weight to the teaching Christopher was giving to us. The audience responded by rising to their feet and breaking into a thunderous prolonged applause. Looking around, tears were welling up in people's eyes. Speaking to a colleague afterwards, we were both moved, and openly and unapologetically wept. It was a powerful moment. I still cannot place my finger on exactly why I was so overcome with emotion. Their response to God's call certainly has something to do it: their courage to go against the grain, so to speak, and to witness to the Kingdom. Maybe we see a little slice of heaven in them? It was overwhelming to see the public outpouring of love by the faithful for their priests and religious. There was such a sense of pride, such a sense of love. We don't often thank the priests and the religious for all they do for us; how they serve us, pray us, sacrifice for us. This was a moment of thanks, an expression of gratitude for the gift of their life to God and the gift of their life to us -- and for us to thank God for them.