A moment of Grace on the sidewalk: A reflection from Nicole Campbell, Toronto 40 Days for Life organizer

After the 40 Days for Life Campaign last spring 2010, a few us decided to keep us the presence at the abortion facility on almost a daily basis because abortions were still happening and we felt that we had to do something. Each week, a small group of us would get together to pray, counsel and love these women and men going into the abortion facilities, praying that they would change their minds. Often times, we don't get to see the fruit of our labour but, on occasion, it happens and what a gift it is!  I'm reminded that we are called to be faithful, not successful, as Mother Teresa always shares. This brings a lot of comfort. All we can do is our part and leave the results up to God. 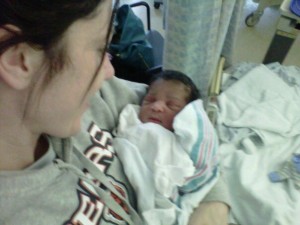 On a Wednesday in June, 2010, I had a busy day scheduled. Going to the abortion facility that day was not going to be a possibility. However, all that changed when one of my meetings got canceled and I was freed up. When I go to the abortion facility, I usually bring pamphlets from the Sisters of Life. Some pamphlets show the developmental stages of the child, while others show what abortion truly is. I also bring along fetal models with an image of Our Lady of Guadalupe (the patroness of the unborn) as a visual image to the women going into have an abortion. It's very powerful. This particular day, I was alone. I took my little bag of resources to the sidewalk before I even had a chance to put my bag down, I saw a young woman looking around to make sure she was at the right building. I approached her and asked her if she was looking for the "Women's Clinic". She told me that indeed she was. I began talking with her about her situation and asked her why she was there. She told me that she had two children already at home and her mom would "kill her" if she found out she was pregnant again. She told me her boyfriend didn't know that she was there and that he is really against abortion, so she didn't want him to know. I told her I could help her and that she wouldn't be alone. She told me she was seven weeks pregnant. I showed her what was going on with her little one in the womb, and she was amazed! The abortion workers don't tell the women that their child has a beating heart; in fact, all they say is that it is "blood and water." I find it interesting that the workers in the abortion facility use these terms since we know that blood and water came from the side of Christ when He was pierced. I also showed her a picture of a first trimester abortion. She had no idea and was horrified. She then told me she would be right back and she moved further down the sidewalk away from me. I wasn't sure who she was talking to, but after the call, she walked over to me and said, "I can't do it, I just canceled my appointment!" I was thrilled as I could instantly see the relief on her face. You could even see that joy had found her again. I hugged her and told her how proud I was of her and that we would be there for her. I gave her my number and we began a beautiful friendship. About five months into her pregnancy, she called me to tell me that she finally told her mom. Remember, this is the reason why she wanted to have the abortion in the first place. She had so much fear around what her mother would think. I was nervous to find out how it went. She said, "I can't believe it, she was mad for about two seconds!" I was shocked! We talked about how she almost had an abortion out of fear of her mom and her mom surprised her with support and began calling her everyday to see how she was. God is so good! I introduced her and her other children to the Sisters of Life where they provided clothing, supplies and most importantly, love. Early in January, 2011, this courageous woman delivered a beautiful baby boy! She was ecstatic and so was I. Baby Sean is now my God-son and I'm so happy. I've continued a friendship with the entire family. Although there is no way that I can provide personal involvement to this extent to every woman, there are people that God chooses to bring into my life and this girl was one of them. Again, these women need someone there on the sidewalk to love them and to tell them the truth. This little boy was almost lost to abortion. It is my goal to have a daily presence year-round outside of the abortion facilities starting with 960 Lawrence Avenue West, where the 40 Days for Life is currently being held in Toronto. Love changes hearts, minds and brings people to Christ. Let us continue to pray for these women who are in the dark and feel that they have no choice. Let us go to our Modern Day Calvary to bring light to the darkness. Monsignor Phillip Reilly said that we are all called to love. It's not for a select few. Please consider coming to pray with us outside of this dark place, to be a beacon of light and hope to women and men who desperately need it.