A Love for God, and a love for the Cross 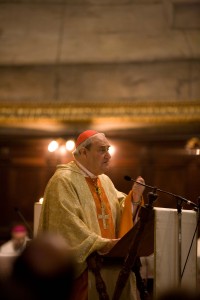 That's how Brother André became a saint, according to the Archbishop of Montreal, Cardinal Jean-Claude Turcotte. Those words came as part of his homily during a Mass of Thanksgiving this morning at Sant’Andrea delle Valle in Rome. It was also during the homily that the congregation erupted in an extended applause for the newly named Canadian saint. While festivities continue today, and throughout the month in Montreal, it may do us good to reflect momentarily on a few excerpts from Cardinal Turcotte's homily.  The first excerpt is on the doorkeeper's path to holiness:

He became a saint because he loved God and placed himself entirely at the Lord’s service. He also became a saint because he loved the men and women he met on the journey of life, especially the suffering. He prayed for them, and placed himself entirely at their service as well. Brother André was permeated by the “constant love” mentioned in the first letter of Peter. He also made his own these subsequent words of the epistle: “serve one another with whatever gift each of you has received”. And these gifts were many.

Among these gifts was his love for the cross.

Jesus told his disciples: "Come to me, all you that are weary and are carrying heavy burdens, and I will give you rest. Take my yoke upon you, and learn from me.” Brother André never tried to pass off his cross. He never tried to give to another the yoke that was meant for him. He carried his cross, without complaint. He carried it out of love, as Christ carried his own cross. One of his good friends, Joseph Pichette, remarked that Brother André often said “Don’t ask God to remove your trials, but rather to give you the strength to endure them.”     He would also say “it was in those times when my trials were greatest that my work succeeded the most”.