A love and mercy that overcome our darkness | Word Alive 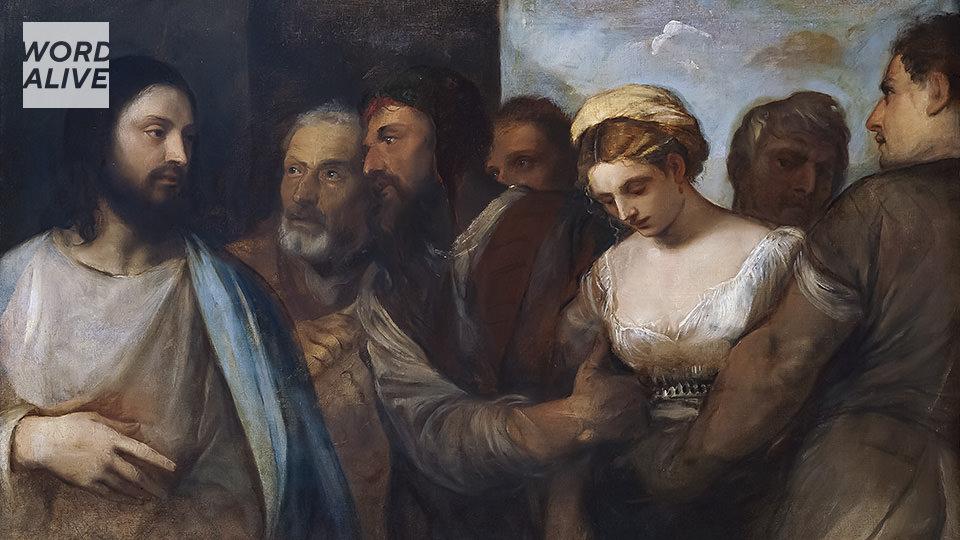 Christ and the Adulteress by Titian (Source: Wikimedia Commons)


A love and mercy that overcome our darkness

A reflection for the Fifth Sunday of Lent, Year C

I recently completed a 25-year career in public safety. As I meditated upon John's Gospel this week, it led me to reflect upon a particular incident during my tenure with the Royal Canadian Mounted Police. In the early 2000s I was involved in a high-profile case in central Alberta. I won’t go into details of the crime, but it was particularly egregious. Almost every police officer within a 200km radius was involved in searching for the suspect, and once he was located, he led us on a high-speed chase involving over twenty police cars. He was known to be armed and dangerous and had already discharged a firearm four times. Due to the great risk to the public AND the police, a "spike belt" was used to disable his vehicle. By chance, it was another officer and I who were in a position to approach the vehicle and attempt the arrest. We approached the suspect's vehicle, our handguns drawn, commanding the suspect to exit the vehicle and lie face down upon the ground. As he stepped out, he whispered that he "could" not, no "would" not go back to prison. I saw him sigh, lower his head in resignation, and then he reached for a handgun tucked in the waist of his pants. At that moment I was not thinking “what would Jesus do”. My actions were not being guided by a recognition of his dignity, the honour due to him being made in the image and likeness of God, regardless of his waywardness. I was solely thinking about what I wanted to do. I was in a position to be as our God in the first reading. I had the power to make him “lie prostrate, never to rise”. This was a bad man…a very bad man, and I could do something about it. I could pull the trigger, I could "quench him like a wick". I knew that he was reaching for his handgun not with any intent to hurt me or others but in a desperate attempt to force me to shoot him, to keep himself from returning to jail. But I had such anger towards this man. I had already mentally judged him, and my jury had given their verdict, just as the scribes and Pharisees had judged the adulterous woman. And I started to pull the trigger. And then God placed his hand on my shoulder, and I let my finger relax on the trigger. At that same moment, the suspect moved his hand away from his waistband, lay face down on the ground, and we were able to arrest him.  I make this confession to you today: I judged. I condemned. I nearly cast a stone. And yet, I didn't. And it wasn't because of anything I did. It was because our Lord has taken possession of ME, a lowly sinner. It was HIS love and mercy that overcame MY darkness. It was the abundant grace that He bestowed on me that finally caused me to look beyond myself and to see the wounded man before me. For a long time I carried the weight of shame DESPITE our Lord telling me in the Sacrament of Reconciliation that He does not condemn me. The love that our Lord lavishes upon us, upon ME, it can be overwhelming. So often we allow ourselves to become burdened by our sins, even those forgiven, simply because we struggle with accepting how much our Lord loves us. I don’t know how many times I have read the words of our first reading – "Remember not the events of the past, the things of long ago consider not" – or the words of St. Paul – "for his sake I have accepted the loss of all things and I consider them so much rubbish, that I may gain Christ and be found in him". How many times did it take reading the words of John describing our Lord’s loving forgiveness paired with a firm admonition to sin no more before I finally had the confidence to LET GO. It is so important during the Lenten periods in our life, those times we fall and then get back up again, only to do it all over again, it is important to realize those failures are leading to something…they lead to Easter! Not only does our Lord offer us His forgiveness, He offers us a radically different way of being. We hear it proclaimed in our first reading: "see, I am doing something new! Now it springs forth, do you not perceive it?" I have to admit, in the world we live in today, a world in which the evil I described in my story can exist and flourish, it is often hard to perceive our Lord making all things new, especially within myself. But it IS there, even in those times where we must simply take it on faith. No matter how many times we read scripture, we will never know the exact words our Lord wrote in the dirt. But we know that those words had power, that they changed hearts, and that it involved forgiveness. We know it involved faith. No matter our sins, the waters of eternal life are there for us, resurrection in Christ Jesus is there for us, the love of our Lord and Saviour is there for us. Whether your Lent started on March 2 or feels like it started back in 2020 and has not yet ended, do not stop striving for what lies ahead, do not stop your "pursuit toward the goal, the prize of God’s upward calling, in Christ Jesus".

Deacon Ryan Sales, a permanent deacon of the diocese of St. Paul in Alberta, currently serves as a campus minister at the University of Dallas in Texas. He and his wife have been married almost 19 years. They have two children and four grandchildren. Deacon Ryan leads daily prayers on Instagram: @dcnryan.