A local Nativity scene for the Papal Mass 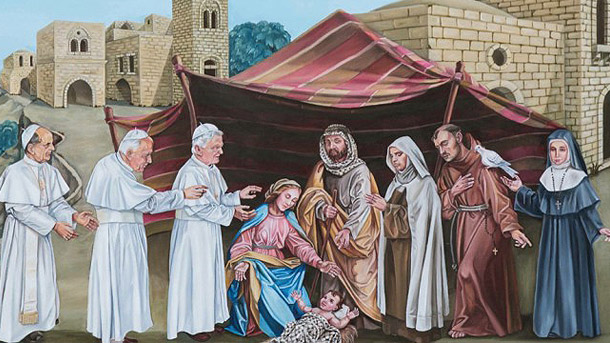 Image: BETHLEHEM – A work of art of 14 meters long by 6 meters wide. Nothing is too big or too good to welcome the Holy Father. Created by a Palestinian artist, the figurative art piece, full of symbols, will be positioned as a backdrop behind the altar for the Papal Mass. A nativity scene reinterpreted with many local elements.
The stable mentioned in the Gospel is represented by a tent, a symbol of all the many refugees from the region who, like Christ, are reduced to a miserable condition. It is also symbolic of the Incarnation of God who came “pitching his tent among us” (John 1:14).
The shepherds are not the only figures. The three popes who visited the Holy Land, Paul VI, John Paul II and Benedict XVI are there to worship the Child, followed by Doves of Peace. Pope Francis, who will preside over the Mass in front of the art work, is indirectly represented by his patron saint and namesake, Francis of Assisi, friend of the poor, but also the protector of the Holy Places.
Two religious sisters are also shown on the right, each side of St. Francis: the Carmelite Sister Mariam of Bethlehem, and Sister Marie-Alphonsine Ghattas, founder of the Sisters of the Rosary (the first Palestinian congregation) who was born in Jerusalem but spent most of her life in Bethlehem. They are two locals of the nineteenth century beatified in recent years.
Saint Joseph is wearing a black and white kaffiyeh, local traditional headdress that has become a Palestinian emblem. This is also used to swaddle the Child Jesus in his manger.
In the background, the city of Bethlehem and the hills of the Judean desert.
Rich in symbols, intended as such by the artist, a Palestinian native of Bethlehem, Robert Jakaman, who studied art in Italy.
Myriam Ambroselli of the Latin Patriarchate of Jerusalem.