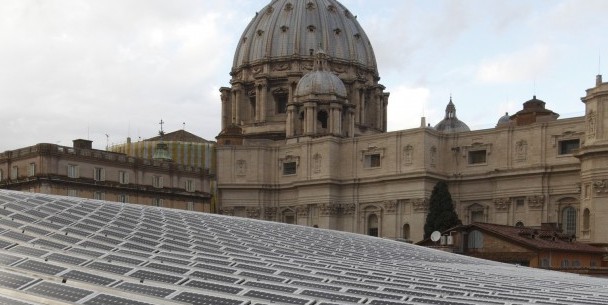 Over the course of the past decade the ‘Go Green’ movement has swept the world and taken it by full force. It is a delight to note that the Vatican was the first ‘country’ to officially ‘go green.’ In September of 2007 author for the Weird Science magazine and website Brandon Keim wrote an article regarding how the Vatican had teamed up with a Hungarian carbon offset company ‘KilmFa’ to plant the Vatican Climate Forest. This climate forest which covers up a vast 37 acres is now located in the Bukk National Park in Hungary. Brandon Keim also took note of writing about the Solar panels which can now be found on top of the Vatican. BBC News also published an article in November of 2008 about the solar panels that the Vatican had installed. This article stated that the first building to get the go ahead for these solar panels is the celebrated Nervi Hall. The BBC made note of saying that 2400 solar panels had been installed onto the roof of Nervi Hall and that they are working flawlessly to this day, powering environmentally friendly energy throughout the entire building. Moving forward to 2012 the BBC recently published another report on the status of the Vatican green movement quoting, “The city state intends that by 2020, 20% of its electricity will be provided by renewable energy.” To further how serious Pope Benedict XVI is about going green multiple newspaper sources have stated that in September of 2012 the French car company ‘Renault’ had presented the Pope with his very first electric car. The car is to be used by the Pope in his summer home of Castel Gandolfo and will enable him to drive around the grounds of the Vatican in an eco friendly way. Take note that this is not a new electric ‘Popemobile’ but rather a new take on how the Pope can travel around the State of the Vatican. Mercedes Benz is the company that designs his traditional ‘Popemobile’ and it can be noted that they too are in the works of creating an eco friendly version of the car for the Pope in the coming years. What could be made of these recent initiatives? It could be seen as a gift, not only to the Catholic Community but to the entire world because it means one entire nation (small though it may be) is leading the way, showing the rest of the world how to respect thethis earth on which we live. Pope Benedict XVI himself has stated that it is one of his goals to push for a greener tomorrow. If the elderly pope can promise to use his papacy to show the seriousness of environmental issues, then the international community could take a cue from the Vatican example and should push for every nation to meet similar goals and become environmentally friendly by 2020. --- Solar panels are seen on the roof of the Paul VI audience hall at the Vatican.  CNS photo/Paul Haring