A Good Day to Say 'Thanks' 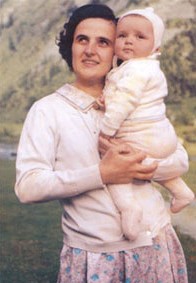 I was recently doing some research on saints and came across a favourite of ours here at Salt + Light: Saint Gianna Beretta Molla.
Saint Gianna, whose feast day we celebrate on April 28th, was a physician (specializing in pediatrics), a wife, and a mother. Early in what would be her final pregnancy she experienced a number of complications. She refused an abortion and chose to carry the child to term. Knowing that the complications could cause a difficult delivery she told her family and doctors: “If you must decide between me and the child, do not hesitate: choose the child - I insist on it. Save him”. On the morning of April 21, 1962, the child -- Gianna Emanuela -- was born. Unfortunately though, seven days later, and after much suffering, Gianna died at just 39-years old. Gianna was canonized in 2004 by Pope John Paul II, her husband Pietro and children, including Gianna Emanuela, were in attendance. St. Gianna courageously and lovingly gave to the extreme -- sacrificing her life for another life. It's something that not a lot of us will be called to do. But all of us make sacrifices, and on this Mother's Day I can't help but think of all that my mother gave me, all the sacrifices that she made for me... many of which I did not realize at the time, and many of which I will probably never realize. The little things -- done with great love. St. Gianna once said "The secret of happiness is to live moment by moment and to thank God for all that He, in His goodness, sends to us day after day." Today is a good day to say 'thank you' to our moms -- and to thank God for her too. May God bless mothers everywhere!