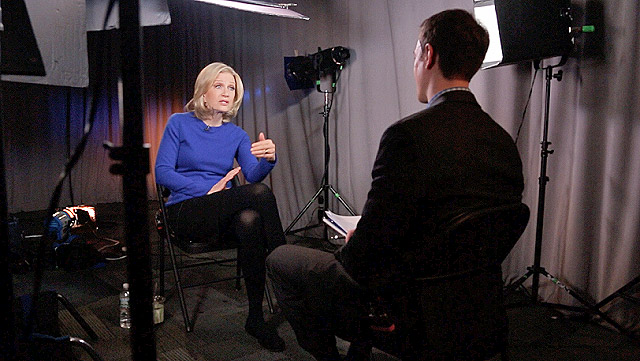 Sebastian Gomes, Salt + Light  writer/producer/director gives us a glimpse into filming The Francis Effect, and particularly his interview with Diane Sawyer:

A person of Diane Sawyer’s stature needs no introduction. She is simply one of the best and most distinguished journalists in the English-speaking world. When we asked if she would be willing to do an interview with us for The Francis Effect, she immediately accepted and opened the doors for us to the ABC studios.  After all, who doesn’t want to talk about Francis?! During our interview, which is only one of a few that she has done from the other interview chair, I discovered a person of profound depth with a razor-sharp intellect.  Her abundant experience as a journalist has given her what I would call “the human insight,” that is, a picture of humanity that is simultaneously singular and comprehensive, aware of the challenges and difficulties facing our collective progress, yet able to delight in the simple and concrete expressions of charity, mercy and love happening around us every day.  In other words, a like-hearted person to Francis.

Gomes: What do you remember most about the night Pope Francis first appeared to the world, March 13, 2013? Sawyer: First the unknown. We got the name, we had not fully prepared the way we should have prepared, and then he walks out and from the very beginning there were the obvious surface things: that simple cross. And we’re all talking about it, and he’s wearing his own shoes.  We’re all talking about it because that’s what we do, and then there was something so personal – and how you can do it with that giant square, and the billions of people watching – say “I’m really talking to you.”  And we were looking at ourselves astonished at the great drama of someone who was going to speak simple language with a purpose. And I remember we commented at the time that he used children’s prayers, so that every child around the world knew what he was talking about, the “Our Father”, “Hail Mary,” that he did the uniting things almost from the very beginning.  And then I remember the end of it – which I commented on the show – that he talked about a journey of brotherhood, and love and mutual trust. And that choice of words: “a journey,” which means destination unknown, we’re traveling together, and brotherhood, which was something that reached to the Americas and around the world; it said this was a new era, this is a beginning.

The Francis Effect DVD box set is now available online and from the Salt and Light store. The 3-disc set includes the feature documentary, a comprehensive study guide and over 6 hours of extended interviews.