A feast for a Pope: October 22nd

The day October 22nd has a storied history. 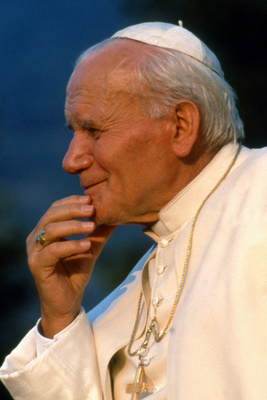 A parliamentary committee chose the design that would become the Canadian flag. The Supremes became the first all-female music group to have a number one selling album. Toastmasters was established. Some even speculate that Harry Houdini's physical encounter with a student in Montreal on that day eventually led to his death a week later. But for the Church -- particularly the local Churches of Rome and within Poland -- this day will now be remembered as the feast day of Blessed John Paul II. The selection of the date is appropriate as it was the day of John Paul II's Papal inauguration in 1978. Catholic News Service's Cindy Wooden has more on today's announcement, including the wording for the opening prayer of JPII's memorial Mass:

Vatican announces Masses, Oct. 22 feast day for Blessed John Paul By Cindy Wooden Catholic News Service VATICAN CITY (CNS) -- The feast day of Blessed John Paul II will be marked Oct. 22 each year in Rome and the dioceses of Poland. When the Vatican made the announcement April 11, it also said Catholics throughout the world will have a year to celebrate a Mass in thanksgiving for his beatification. While thanksgiving Masses for a beatification -- like the observance of a feast day -- usually are limited to places where the person lived or worked, "the exceptional character of the beatification of the Venerable John Paul II, recognized by the entire Catholic Church spread throughout the world," led to a general permission for the thanksgiving Mass, said a decree from the Congregation for Divine Worship and the Sacraments. Continue reading

- Be sure to tune into our live coverage of John Paul II's beatification May 1st. The Mass begins at 4am ET. CNS photo/Catholic Press Photo