God works in a very timely manner. Thursday was no different. Late in the afternoon, word spread through the office that press tickets were available for the premiere screening of Habemus Papam at the Toronto International Film Festival.
A few fellow producers and I finished our work and made our way over to the Bell Lightbox Theatre, just in time for the 6:30 p.m. showing. We were very fortunate, seeing as the screening was sold out. Directed by Nanni Moretti, Habemus Papam imagines how a conclave -- the oldest election in history, by any institution -- really works. As the plot unfolds, Cardinal Melville (played by Michel Piccoli) is overwhelmed by his election to the papacy following the death of a beloved Pope. The new Pope slips into a deep depression. With the help of his aides and Vatican officials, a psychiatrist is called in to help with the situation. However, Melville slips free from Vatican officials and wanders the streets of Rome incognito. Since the newly-elected pontiff hasn't yet been introduced to the people, the Cardinals are obliged by Church law to remain confined to the Vatican until the entire situation is resolved. 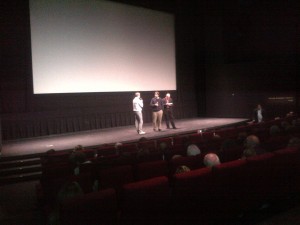 At this point, I won't go any further, so as to not ruin the suspense. All in all, the film has a very unique storyline. Moretti uses his own interesting devices and opinions to craft a solid film. Moretti brings a refreshingly human element to the storyline and to each character. Viewers have the chance to see up close how a Pope might really feel when confronted with the overwhelming task of shepherding a billion faithful. The director convincingly portrays the inner thoughts and feelings of Cardinals during that very pivotal time. Despite Moretti's admittedly non-existent relationship with the Catholic Church, he decides to venture down a path of neutrality. In a question and answer session after the screening, he says he now feels at peace with the Church, even though he doesn't believe in her as an institution. With the aide of a translator, the Italian director addressed questions about the storyline, papal infallibility and diversity in the Church. Considering that this movie didn't make much of a splash at the Cannes International Film Festival, its sold out screenings at TIFF indicate that it has fared well with Toronto audiences. - Credit: CNS photo from L'Osservatore Romano