A charismatic founder pens his memoirs

Few Canadian Catholics are as beloved as Fr. Bob Bedard. Initially, I had mixed feelings about the founder of the Companions of the Cross. But he won me over, too. 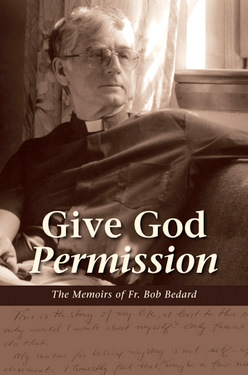 Seven years ago I worked in campus ministry in Ottawa, and so sometimes I had the opportunity to hear Fr. Bob preach. I recall fuming at one politically-tinged homily, the conclusions of which I didn’t share. Back then, I wasn’t very comfortable with the charismatic spirituality of the Companions, either. (Passion and conviction can intimidate those of us who are lacking.) But one could not help but be taken in by his priestly heart. Though Fr. Bob was the founder of a growing community of forty priests serving in five cities, he enthusiastically agreed to help with our small events at Carleton University. I distinctly remember one reconciliation service where Fr. Bob spent hours listening to students pour out their souls in confession. Heaven knows how many confessions he's heard in his half-century as a priest. Yet to each student, he listened with rapt attention. His counsel was reflective and personal, God’s absolution assuredly pronounced, as if each sacrament was the most important he would ever administer. Because each one was. Years later I spotted Fr. Bob at a conference in Toronto. I was about to reintroduce myself, since it had been so long. Instead, he called me by name and pulled me in for his trademark hug. (Someone once told me that a Fr. Bob hug would result in a priestly vocation, though this hasn’t yet taken effect on me.) One month later, I learned that he was hospitalized in grave condition. A combination of cognitive, respiratory and heart problems left him unconscious. Fr. Scott McCaig, the moderator and superior general of the Companions, warned that death could be imminent. He later regained consciousness, but was diagnosed with dementia and, cruelly, was further struck by pneumonia and a stroke. According to the most recent update on the Companions website, Fr. Bob “has defied the odds again and rallied amazingly”. He is presently at a long-term care facility. “It seems the Lord has more for Fr. Bob to do yet,” wrote Fr. McCaig. His ministry never really stopped. Talks by Fr. Bob, filmed before his health crisis, can still be seen on Food for Life, which S+L airs Monday, Wednesday and Friday mornings at 8 am. Now there's new material from Fr. Bob that reveals insights into his remarkable life. The Companions of the Cross have published Give God Permission: The Memoirs of Fr. Bob Bedard. Written over the course of several years, the book will be released tonight at the community’s 25th anniversary dinner. The event also commemorates the ordination anniversaries of 13 priests, including Fr. Scott McCaig’s 15th and Fr. Bob’s 55th. Archbishop Terrence Prendergast of Ottawa endorses the memoir as “a testament to his profound openness to the Holy Spirit”. Those who miss Fr. Bob's presence—his countless friends, former students and parishioners do so achingly, myself included—will find solace in 'hearing' his voice again through his writing. UPDATE: Give God Permission: The Memoirs of Fr. Bob Bedard can be now ordered by calling the Companions of the Cross at 1-866-885-8824. The book can also be purchased from their online store.