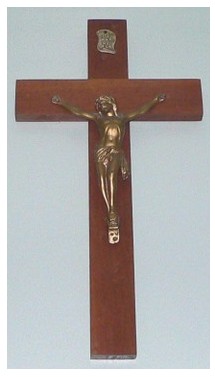 A couple of weeks ago I posted a note about how the organizers of WYD 2011 in Madrid are hoping to "live intensely" the next three years and touch hearts. It looks like they've got their work cut out for them.
In the northern Spanish city of Valladolid, a judge has ruled that Macias Picavea Elementary school must remove the crucifix from it's classrooms. Like many nations, Spain's constitution guarantees citizens' freedom of religion, and also guarantees the "secular and neutral" character of the Spanish state. The Asociacion Cultural Escuela Laica, a lobby group of parents for secularized schools, led the push for the removal of the crucifixes. The parents first asked the school to remove it's crucifixes in 2005. When the school decided not to remove it's crucifixes, the parents launched a legal suit. This past week a court in Valladolid ruled the school must remove the crucifix from it's classrooms, much to the delight of the lobby group and the dismay of Spanish prelates and the school's Council.The Archbishop of Valladolid, Braulio Rodrigez Plaza, told Vatican Radio's Spanish language program the sentence is a disappointment. The archbishop also said if we follow the logic of this sentence, almost any symbol could be deemed offensive to the general public and required to be removed. He said the crucifix doesn't hurt anyone, and there is no reason to fear the presence of the crucifix because it is only "love and peace." He gave the example of the city of Bruges, where there are pictures of Mary and Jesus on nearly every street corner, and nobody claims to be offended, not even the non-religious or those of other religions. The Cardinal Archbishop of Toledo, Antonio Canizares, was not quite as diplomatic in his statement. " This is an act of Christophobia," he said. He added that Christophobia is the chief of all social ills and is, at its core, an expression of society's self-hatred.How did Spain catch this acute case of Christophobia?Perhaps a bit of context is needed here. Let us remember that Spain lived through the Franco dictatorship. Unlike other dictators the world has seen who sought to destroy the Church and radically transform society, Franco defended the Church and declared Catholicism the official state religion. He enforced this as one would expect a dictator enforce the state religion. Civil servants had to be Catholic, often requiring statements of "good behaviour" from a priest. Civil marriages were considered null and void and had to be reaffirmed in Church. Like many a dictator, he engaged in suppression by imprisonment, or abuse, of his political rivals. He passed laws prohibiting women from becoming judges or testifying in trial, from becoming university professors, and from holding their own bank accounts. I don't want to get into a laundry list or a history lesson. My point it to say given this history, it is not incomprehensible that Spain would be suffering from a bad taste in their mouths when it comes to the Catholic Faith.The organizers of World Youth Day 2011 certainly have their work cut out for them. They have many hearts to touch in the next three years, but they also have to do considerably more than that. This Christophobia is not simply the result of the swinging pendulum of society and history. This is the result of deep scars on the collective Spanish psyche. It's worth noting that the voices speaking out against the cruicifx are not new immigrants asking for their own religions to be recognized. They are Spaniards who have developed a phobia of all things related to Christ. The WYD 2011 team has to show the Spanish nation that this cross is not "the symbol of everything a dictator imposed on our people." That in-fact, what that dictator imposed probably had nothing or little to do with the Gospels. They WYD team has to put the Gosepl on display and say "this is what that cross stands for."Perhaps, if the Asociacion Cultural Escuela Laica could be brought to understand that, to understand the Gospel, and the cross as the symbol of that Gospel, they might be willing to drop their lawsuits and let the cross hang on their walls as a sign of love and peace.