A bishop, a rope-maker, and a spirited priest from the lakeside: Our newest saints 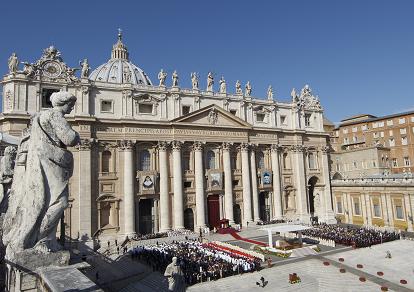 These are the Church's three newest saints: a bishop with a missionary heart, a rope-maker who taught women, and a spirited priest from Como, who became a missionary of sorts in his 70s. They share a few features: they all founded religious orders and they all felt called to serve the disadvantaged, whether they were the poor, immigrants, impoverished women, or people with mental and physical disabilities.
St. Guido Maria Conforti was an Italian who founded the Xaverian Missionary Society. The sole purpose of this society was to evangelize non-Christians. By 1899 Conforti was sending missionaries to China. However, in 1902 he was appointed Bishop of Parma. What is a man who is a missionary at heart to do in the midst of Catholic Italy? He founded schools of Christian Doctrine in every parish in his diocese, so that everyone had access to solid faith formation. Finally, he visited his missionaries in China in 1928 and died in 1931. The Xaverian Missionary Society has houses around the world. For more information about the Xaverian Missionaries, visit www.xaviermissionaries.org. St. Louis (Luigi) Guanella was a priest from northern Italy. He started out as a diocesan priest but his desire to serve disadvantaged youth led him to the Salesians and Don Bosco. Guanella worked with Don Bosco for three years until his bishop called him home. The desire to serve the poor and disadvantaged did not go away and Guanella tried again and again to continue the work he had done with the Salesians, but his efforts were always thwarted. Finally he was sent to Pianello, Italy - a small town on the shore of Lake Como. There he started a pious union of women dedicated to working with orphaned girls. That group of women became the Daughter's of St. Mary of Providence, who today have houses around the world, including Vancouver, B.C., where the Daughters run a Religious Education program for children and young adults with special needs. Guanella also founded the Servants of Charity, a religious order for men, and the Confraternity of St. Joseph. Find out more about the orders founded by St. Louis Guanella by visiting here, here or here St. Bonifacia Rodriguez Castro was a cordmaker from Salamanca, Spain. She gathered women together in her house-shop for spiritual encounters These women became the Servants of St. Joseph and dedicated themselves to giving poor women both a technical and religious education. The sisters worked side by side with the laywomen in the shop and did not wear habits -- something that did not sit well with the local clergy. Today the Servants of St. Joseph work with women in South America, Congo, Vietnam, the Philippines and Papua New Guinea. For more information about the Sisters, visit their website. Pope Benedict said in his homily that the lives of these three saints highlight the fact that love is the core of the Christian message and every action we make needs to be measured up against that love. What's more, these three saints each founded an order or institution that today continues to live out that love and offers a chance for each and every one of us to get involved in that mission. - Credit: CNS Photo/Paul Haring