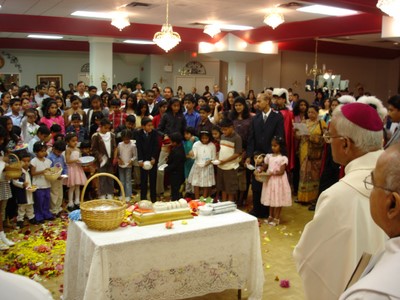 I couldn't help but smiling as I watched dozens of children shower a statue of the Infant Mary in the Church hall of a Mississauga, Ontario parish this past weekend. I'm sure our Blessed Mother was smiling as well! The event came as part of Monthi Fest -- a special celebration hosted by the Mangalorean community here in Toronto. Mangaloreans trace their roots back to, appropriately, Mangalore, a city in south western India. Monthi Fest has a two-fold purpose: It celebrates the birthday of the Blessed Virgin Mary, the wonderful feast which the Church celebrated yesterday. (Monthi is actually a title for Blessed Mother in in Konkani, the native language of Mangaloreans. I believe the literal translation is 'Mother Mary.') It also serves as recognition of first harvest -- it would be the equivalent of our Thanksgiving. Families have food blessed at the Church and offer prayers of thanksgiving for the crop. This particular event, hosted by the Mangalorean Association of Canada, began with children showering the statue with flower petals. The crowd then processed into the Church where Holy Mass was celebrated in Konkani. The community was blessed to have Archbishop Albert D’Souza, the Archbishop of Agra, India, who was visiting Canada. He was joined by other local and visiting priests as well as one missionary Indian priest who was celebrated his 75th birthday that day! The Mass was followed by an enjoyable evening of songs, a skit, a delicious vegetarian meal -- as is custom at Monthi Fest -- and plenty of fellowship. It was wonderful to see a community, thousands of miles away from their home land, celebrating their customs, traditions, and their faith -- to see them giving thanks to God for all the blessings that have been given to them. Their love for our Blessed Mother flowed throughout the entire evening, and though the language was foreign to me, I found it particularly moving when everyone joined in singing Ave Maria in Konkani. Language did not matter at that point -- we all knew the sentiment that was being expressed! I'm sure it was a birthday party Mother loved!