64 Days with the Ark: Returns tonight!

Leading to the first anniversary of the International Eucharistic Congress in Quebec City, S+L is rebroadcasting its five-part original reality series 64 Days with the Ark. Each week, the S+L Blog will bring you an update of what the pilgrimage participants are doing now. Jerry Grzadka accepted a monumental task when he agreed to organize last year’s pilgrimage of the Ark of New Covenant. The simplicity of the venture—walking from Midland, Ontario to Quebec City while carrying a religious artefact—was quickly complicated by the logistical challenges. Since the pilgrims walked along public roads, a police escort was required. Free meals and billeted accommodations needed to be found. And just who would be willing to join him for the 1000 km trek? Needless to say, Jerry found solutions and the pilgrimage began March 23rd as planned. By the first week’s end, however, the physical toll on Jerry had become overwhelming. His fellow pilgrims had to contemplate continuing without him. Episode 1 of 64 Days with the Ark documents the pilgrimage's difficult first two weeks. One year later 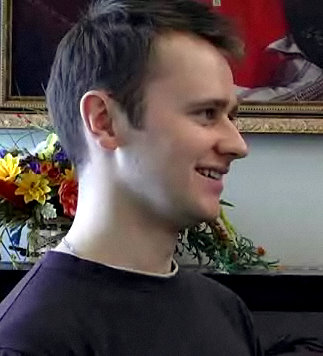 Jerry has continued to put his planning skills to good use as project coordinator for fifth annual Youth Summit, to be held in Quebec City from May 15th to 18th. Cardinal Marc Ouellet and Salt + Light’s Fr. Thomas Rosica, C.S.B. will be among the speakers at the national young adult gathering, which will challenge participants to be “missionaries of the Eucharist”. Looking back, Jerry said that the Ark pilgrimage prepared him for his current role by teaching him that, ultimately, God is in charge. “Even though we might plan things, we can’t that forget it’s His project and He makes it happen the way that He wants.” “We’re instruments,” Jerry continued, “but we can be really powerful instruments.” The young Polish-Canadian has yet more event coordination in store when the Youth Summit concludes: Jerry has a September wedding to plan with his fiancée Lan. For five weeks beginning May 1st, 64 Days with the Ark airs Fridays at 6 PM (ET). Episodes repeat Sundays at 2:30 PM and Tuesdays at 5:30 PM (ET).