64 Days with the Ark: Meet Marjolaine 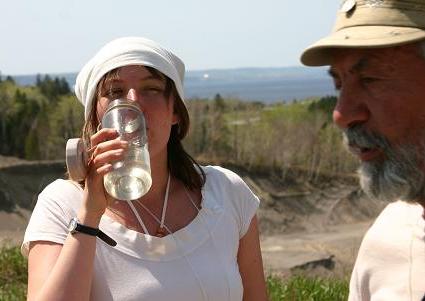 Every weekend, the revolving-door cast of 64 Days with the Ark would ritualize their changes with a short ceremony. New pilgrims joining the pilgrimage would receive navy portageur hoodies and red bandannas. Those who had to return home were presented with wooden crosses carved from sticks found along the route.
My arrival in Trois-Rivières, Quebec for my two weeks with the Ark coincided with that of Marjolaine Trottier. A jovial Quebecer, her steps on the long walk would often be punctuated by a skip, a spin, or a little dance. Compared with my tense demeanor—I often felt frustrated by the obstacles of filming an event constantly on the move—Marjolaine was a free spirit, totally at ease with the unpredictable nature of the trek. Even her itinerary was carefree: from day one, she did not know whether she would stay for one week or continue all the way to Quebec City. 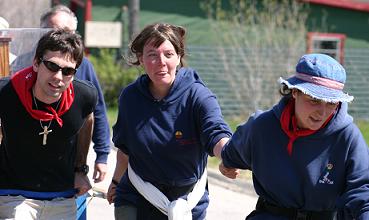 One year later Looking back, Marjolaine recalls how the pilgrimage provided her with “small graces” that confirmed her calling to be a nurse, which she presently lives out in a Quebec City hospital. Yet she has also moved into a vocation discernment house with six other women, where she enjoys daily morning prayer and frequent spiritual direction. “We share the responsibilities of the house between us,” she writes from Quebec. “It’s a very relaxed way of life.” Reflecting on her experience carrying the Ark, Marjolaine remembers fondly how she was able to share her faith throughout la belle province. “This pilgrimage created bridges between regions and also between generations. From everywhere and representing all ages, we found ourselves walking together for Christ.” Episode 4 of 64 Days with the Ark airs today at 5:30 PM. The final episode of the five-part series airs this Friday at 6 PM, just prior to the one year anniversary of the 49th International Eucharistic Congress. Episode 5 repeats Sunday at 2:30 PM and next Tuesday at 5:30 PM (all times ET).