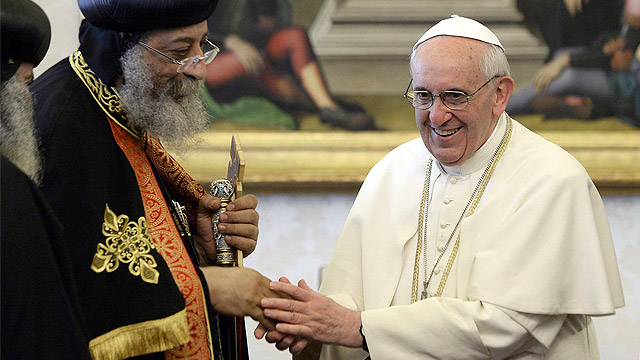 “All the structures of the Church and even the way we express the mission of the gospel has to make this message clear,” she said. “God has come for us in Jesus Christ.  God’s forgiveness and mercy avail to everyone and should not exclude anyone.  This should be transparent in the structuring of the Church’s life and missionary activity.” “It’s a powerful message and many other Christians recognize themselves in it,” she said.  “The primary message of the Decree on Ecumenism is that we come together by renewing the life of our churches and getting closer to Christ.” “If we actually undertake what Pope Francis is inviting us to do we cannot help but become closer to other Christian churches, if we renew and reform the Church in this way,” she said.  “They also have a responsibility to do the same thing. All Christians need to reexamine our living out of the gospel.” “What ecumenical dialog helps us to do is do that discerning together, each church has to examine its own inner life and undertake the renewal that’s required,” she said.  “It’s encouraging. In some ways, Pope Francis is inviting us to carry forward some of the central insights of the Second Vatican Council in its commitment to working for Christian unity.” Vatican II prompted a new self-awareness that had the Church reexamining how the gospel is communicated to modern people, she said. “The structures we put in place 50 years ago, are they still serving us now?  If they are not we should take a look at them.” Pope Francis is “carrying forward some of the central insights of the Council, and that has to do with understanding that the form of the Church and its proclamation will always need to be adapted,” she said. “He is calling us to focus on the central message, but the way we express it and incarnate it in the structures of the church is adequate for the people of today. Pope Francis is also stressing the importance of interfaith dialog, Clifford said.  In June, Pope Francis, Patriarch Bartholomew and the presidents of Israel and the Palestinian presidents Shimon Peres and Mahmoud Abbas met in Rome for joint prayer and a tree planting ceremony in the Vatican gardens, she said. Rosica cautioned against letting interfaith dialog make ecumenism seem “outmoded.” “There is a difference but not a competition between the two dialogues, for ultimately to be effective, interreligious dialogue presupposes that Christians can speak one and the same language,” he said. “The necessity of interreligious dialogue makes ecumenical dialogue even more urgent.” The need for mutual understanding among religions “should make the work of Christians coming together have a greater sense of urgency, so we as churches can dialog together with representatives of Islam, Judaism, Buddhism and other religions,” Clifford said. - (CNS photo/L'Osservatore Romano via Reuters) (CNS photo/Andreas Solaro, pool via Reuters)