By Sabrina Di Matteo, editor of Haute Fidélité
MONTREAL – On Saturday, October 30, the Olympic Stadium played host to one of the greatest religious events of its history. More than 48,000 people of all ages and origins filled the bleachers for the Mass of Thanksgiving in honour of Brother André – canonized as St. André Bessette by Pope Benedict XVI, in Rome on October 17. Each person present had a heartfelt reason to give thanks for St. Brother André, a homegrown saint with an everlasting heart. 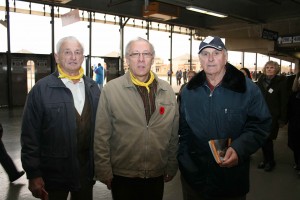 The stadium had not welcomed such a large Catholic gathering since 1984, when Pope John Paul II visited Montreal. Two years previously, in 1982, the stadium had also filled for a Mass following Brother André's beatification. The tens of thousands of people at the October 30 celebration, two days before All Saints Day, gave God praise and thanks for the first Quebec man to enter the calendar of saints. From here on, the liturgical feast of St. Brother André – as he is known in Canada – will be January 6, the anniversary of his death. Among the crowd entering the stadium were about 50 pilgrims from La Nativité Parish in Cornwall, Ont. Parishioners Henri-Paul Ferdais and Daniel Thauvette each had a story to tell about Brother André. Ferdais explained he came to give thanks for the healing of his father: “My father suffered from fainting spells, up to 16 a day, and had come to visit Brother André. He told my father to expect to suffer that night and that he would be healed by morning.” Ferdais asserts this is what happened. Daniel Thauvette turned to Brother André during his weeks of convalescence after an operation for pancreatic cancer in 2008. “My doctor had recommended that I walk a bit every day. I would get up and walk to the end of the corridor. I could see St. Joseph’s Oratory from the window and I would think of Bother André in my prayers,” said Thauvette. 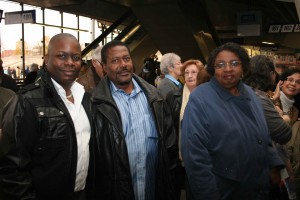 The Benoît family emigrated from Haiti to Montreal 30 years ago. They came to pay tribute to Brother André because they feel especially close to him, given that they regularly visit the oratory. “Br. André is a source of pride for all Quebecers, whether they were born here or elsewhere,” according to Mr. Benoît. His son, age 29, added: “I think Br. André is a role model for youth. If we take the time to learn a bit about him, his values of wisdom, goodness and sharing will inspire us.” Some young pilgrims joined the celebration, too. One-year-old Jordan accompanied his mother Jolie-Ann, who attended with her friend Maryline and her three children. Maryline said she believed it was important to bring her children: “We visit the Oratory as a family and go to mass on Sundays. Why not at the Stadium? It’s a historical mass.”