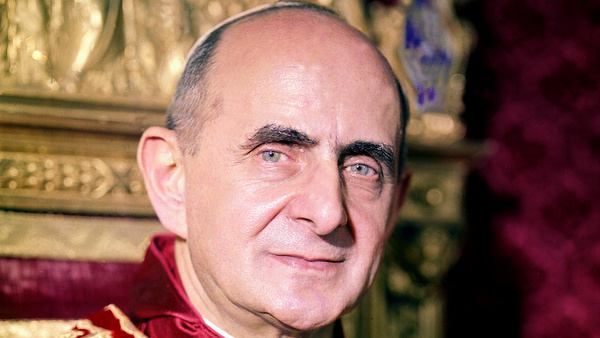 Pope Paul VI is seen in an undated official portrait. Pope Francis will beatify Pope Paul Oct. 19 during the closing Mass of the extraordinary Synod of Bishops on the family. The miracle needed for Pope Paul's beatification involved the birth of a healthy baby to a mother in California after doctors had said both lives were at risk. (CNS photo/Felici, Catholic Press Photo) Paul VI is getting beatified and it's big deal! Now, I’d like to think that we’re all going to be expounding on his virtues over some beers or a cup of coffee. But, somehow, I doubt this is going happen*. So here are three ways to get the conversation going… But before I launch into my 3 points, there’s something I have to put on the table right away because it under-girds everything else I’m going to say. Although Saint Pope John XXIII convoked the Second Vatican Council in the Fall of 1962 it was Paul VI who re-convoked it after John XXIII died on June 3, 1963. In other words, it was Paul VI who gave the Council direction, priority and ultimately brought it to its conclusion. You could say that the Second Vatican Council is Paul VI’s baby, and the Church we see today is to a large extent a reflection of his pontificate. OK, so here goes: A Pope for the Little Guy Prior to his papacy, while he worked for the Vatican’s Secretariat of State, he organized extensive relief work and care of political refugees during the Second World War. Later, as the Archbishop of Milan, he was known as the “archbishop of the workers” preaching the Church’s social teachings, promoting education and the Catholic press. In other words, this pope had great concern for the voiceless, the displaced, and the poor - and did a lot about it. An Excellent Administrator and Consensus Builder Paul VI was a great administrator. He is noted for his rigorous reform of the Roman curia. Even prior to becoming Pope he was known as being a strong advocate of collegiality, and we can thank him for establishing the synod of Bishops. A Pope for Dialogue Now! Now! You say, this can be said of all Popes. Yes, that is absolutely true (of all of these points). But what I’m getting at is these qualities are especially true of Paul VI. He sought dialogue with other Christians, other religions, and atheists. Many of the major documents coming out of the Second Vatican Council emphasize a genuine desire to meet people where they’re at, and furthermore engage them as equals. Now does this remind you of anyone else? Yes, Pope Francis is in many ways channeling Paul VI. And as the first Pope who did not participate at the Council he is in many ways the embodiment of the Church born out of what was envisioned at the Council. Like Paul VI he is a strong advocate for synodality and collegiality, he is a pope that seeks dialogue and a pope that is very much concerned about the displaced and the poor. This desire to encounter people wherever they are  – this desire to accompany people through their struggles will no doubt come into play during this synod on the Family. So there you have it! On October 19 when we celebrate the beatification of Pope Paul VI you’ll be prepared to mention a few good things in his honour. In the meantime as we wait for the big day, I’ve dug into the CNS photo archives to share with you over the coming weeks some iconic images from his pontificate. In fact, I love these images so much that many of these photos feature prominently in The Church Alive series. And, if you’d like to learn more about the Second Vatican Council and the documents that Paul VI promulgated check out the Church Alive series, our study guide has everything you ever needed to get started! *OK, for the schooled people out there, Humanae Vitae is going to come to mind. But as many great thinkers will no doubt attest, a great thinker is much more than his most famous work!