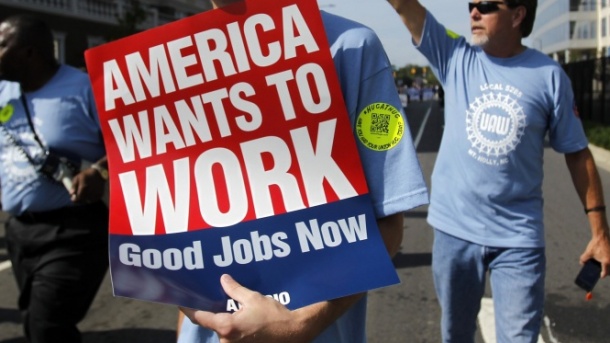 Every human being enjoys a basic right to be respected, not because of any title, position, prestige, or accomplishment but first of all because we are created in the image and likeness of God. From an ethical and moral perspective we embrace the exhortation of St. Paul "to anticipate one another in showing honor" (Rom 12:10). Today's competitive culture challenges us to strive for victory and advantage, but for St. Paul the challenge is to build each other up and honor one another's innate dignity.
Labor Day is an opportunity to take stock of the ways workers are honored and respected. Earlier this year, Pope Francis pointed out, "Work is fundamental to the dignity of a person. . . . It gives one the ability to maintain oneself, one's family, to contribute to the growth of one's own nation." Unfortunately, millions of workers today are denied this honor and respect as a result of unemployment, underemployment, unjust wages, wage theft, abuse, and exploitation.
Even with new indicators of some modest progress in recovery, the economy still has not improved the standard of living for many people, especially for the poor and the working poor, many of whom are unemployed or underemployed. More than four million people have been jobless for over six months, and that does not include the millions more who have simply lost hope. For every available job, there are often five unemployed and underemployed people actively vying for it. This jobs gap pushes wages down. Half of the jobs in this country pay less than $27,000 per year. More than 46 million people live in poverty, including 16 million children. The economy is not creating an adequate number of jobs that allow workers to provide for themselves and their families. Jobs, wages, and poverty are interrelated. The only way to reduce the widening gap between the affluent and the poorest people in our nation is by creating quality jobs that provide a just compensation that enables workers to live in the dignity appropriate for themselves and their families.
Growing Inequality Hurts Families and Communities
High unemployment and underemployment are connected to the rise in income inequality. The prophetic words of Pope Emeritus Benedict XVI in Caritas in Veritate warn us of the dangers of inequality:
The dignity of the individual and the demands of justice require, particularly today, that economic choices do not cause disparities in wealth to increase in an excessive and morally unacceptable manner, and that we continue to prioritize the goal of access to steady employment for everyone. . . . Through the systemic increase of social inequality . . . not only does social cohesion suffer, thereby placing democracy at risk, but so too does the economy, through the progressive erosion of "social capital" . . . indispensable for any form of civil coexistence. (no. 32)
Is it possible that this is happening here in the United States? In many places, wealth and basic needs are separated by only a few blocks or subway stops. We only have to look under bridges and in alleyways. The words from Gaudium et Spes (no. 63) from the Second Vatican Council of fifty years ago seem to be just as true today: "While an immense number of people still lack the absolute necessities of life, some, even in less advanced areas, live in luxury or squander wealth." How can it be said that persons honor one another when such "extravagance and wretchedness exist side by side"? 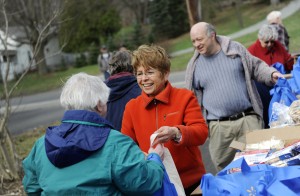 Who Do We Hope to Be As a Nation?
Most people want to live in a more equal society that provides opportunities for growth and development. The current imbalances are not inevitable, but demand boldness in promoting a just economy that reduces inequality by creating jobs that pay a living wage and share with workers some profits of the company. It also requires ensuring a strong safety net for jobless workers and their families and those who are incapable of work. As individuals and families, as the Church, as community organizations, as businesses, as government, we all have a responsibility to promote the dignity of work and to honor workers' rights.
Since the end of the Civil War, unions have been an important part of our economy because they provide protections for workers and more importantly a way for workers to participate in company decisions that affect them. Catholic teaching has consistently affirmed the right of workers to choose to form a union. The rise in income inequality has mirrored a decline in union membership. Unions, like all human institutions, are imperfect, and they must continue to reform themselves so they stay focused on the important issues of living wages and appropriate benefits, raising the minimum wage, stopping wage theft, standing up for safe and healthy working conditions, and other issues that promote the common good. The Church, in accord with her principles on the life and dignity of the human person, wishes to collaborate with unions in securing the rights and dignity of workers.
Private enterprises, at their best, create decent jobs, contribute to the common good, and pay just wages. Ethical and moral business leaders know that it is wrong to chase profits and success at the expense of workers' dignity. They know that they have a vocation to build the kind of solidarity that honors the worker and the least among us. They remember that the economy is "for people." They know that great harm results when they separate their faith or human values from their work as business leaders.
Whenever possible we should support businesses and enterprises that protect human life and dignity, pay just wages, and protect workers' rights. We should support immigration policies that bring immigrant workers out of the shadows to a legal status and offer them a just and fair path to citizenship, so that their human rights are protected and the wages for all workers rise. 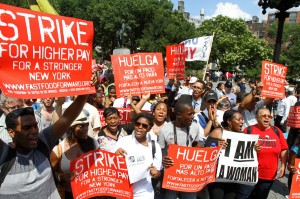 We honor the immigrant worker by remembering that the building of America has been carried out by so many who fled persecution, violence, and poverty elsewhere, coming to America to offer their talents and gifts to support themselves and their families. We welcome the stranger, the refugee, the migrant, and the marginalized, because they are children of God and it is our duty to do so. But at the same time it is important to end the political, social, and economic conditions that drive people from their homelands and families. Solidarity calls us to honor workers in our own communities and around the world.
The pain of the poor and those becoming poor in the rising economic inequality of our society is mounting. Therefore, on this Labor Day 2013, let us renew our commitment to promote the dignity of the human person through work that is honorable, pays just wages, and recognizes the God-given dignity of the working person.
At the end of Mass we are commanded "Go and announce the Gospel of the Lord." We leave with a sense of mission to show one another honor by what we do and say. On this Labor Day our mission takes us to the millions of people who continue to suffer the effects of the current economy.

---
all photos courtesy of CNS