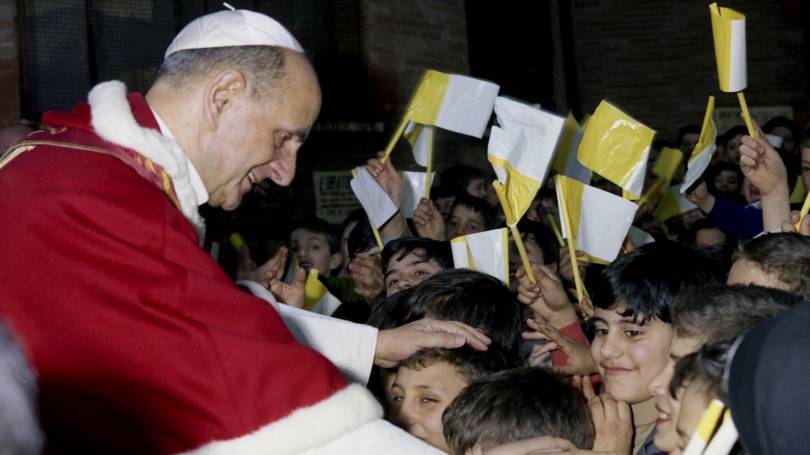 Today for the first time ever, we celebrate the feast day of Pope Saint Paul VI.

Pope from 1963 to 1978, he is probably best known as the pope who made Vatican II happen and the one who wrote Humanae Vitae, that historic and controversial encyclical which first enunciated a clear teaching of the Church against artificial contraception. But in his 15 years as head of the Catholic Church, Paul VI also wrote 7 encyclicals, 12 apostolic exhortations, and hundreds of homilies, letters, and speeches.

In honour of this momentous occasion, here is just a small selection of his writing in 15 quotes from our newest pope saint.

(Hint: Click on the links to read the texts in full.)

1. Merely to remain true to the faith is not enough. Certainly we must preserve and defend the treasure of truth and grace that we have inherited through Christian tradition. ... But neither the preservation nor the defense of the faith exhausts the duty of the Church in regard to the gifts it has been given. The very nature of the gifts which Christ has given the Church demands that they be extended to others and shared with others. – Ecclesiam Suam, 1964

2. The fact that we are distinct from the world does not mean that we are entirely separated from it. Nor does it mean that we are indifferent to it, afraid of it, or contemptuous of it. When the Church distinguishes itself from humanity, it does so not in order to oppose it, but to come closer to it. A physician who realizes the danger of disease, protects himself and others from it, but at the same time he strives to cure those who have contracted it. The Church does the same thing. It does not regard God's mercy as an exclusive privilege, nor does the greatness of the privilege it enjoys make it feel unconcerned for those who do not share it. On the contrary, it finds in its own salvation an argument for showing more concern and more love for those who live close at hand, or to whom it can go in its endeavour to make all alike share the blessing of salvation. – Ecclesiam Suam, 1964

3. For if the sacred liturgy holds first place in the life of the Church, then the Eucharistic Mystery stands at the heart and centre of the liturgy, since it is the font of life that cleanses us and strengthens us to live not for ourselves but for God and to be united to each other by the closest ties of love. – Mysterium Fidei, 1965 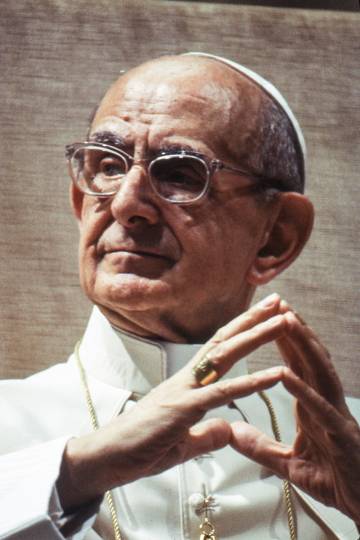 4. To put it in a word, the edifice of modern civilization has to be built on spiritual principles, for they are the only ones capable not only of supporting it, but of shedding light on it and inspiring it. And we are convinced, as you know, that these indispensable principles of higher wisdom cannot rest on anything but faith in God. – Address of the Holy Father Paul VI to the United Nations Organization, 1965

5. Neither individuals nor nations should regard the possession of more and more goods as the ultimate objective. Every kind of progress is a two-edged sword. It is necessary if man is to grow as a human being; yet it can also enslave him, if he comes to regard it as the supreme good and cannot look beyond it. When this happens, men harden their hearts, shut out others from their minds and gather together solely for reasons of self-interest rather than out of friendship; dissension and disunity follow soon after. Thus the exclusive pursuit of material possessions prevents man's growth as a human being and stands in opposition to his true grandeur. – Populorum Progressio, 1967

6. Now if the earth truly was created to provide man with the necessities of life and the tools for his own progress, it follows that every man has the right to glean what he needs from the earth. … All other rights, whatever they may be, including the rights of property and free trade, are to be subordinated to this principle. They should in no way hinder it; in fact, they should actively facilitate its implementation. Redirecting these rights back to their original purpose must be regarded as an important and urgent social duty. – Populorum Progressio, 1967

7. For man cannot attain that true happiness for which he yearns with all the strength of his spirit, unless he keeps the laws which the Most High God has engraved in his very nature. – Humanae Vitae, 1968 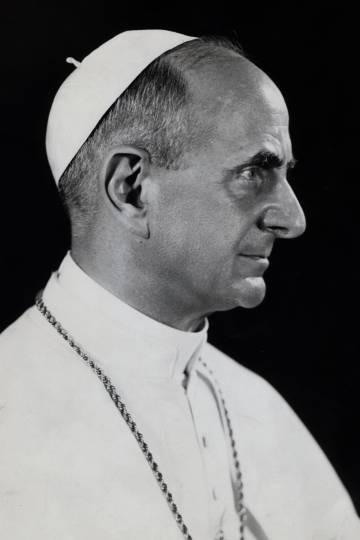 8. The world cannot give up its dream of universal Peace. It is precisely because Peace is always coming to be, always incomplete, always fragile, always under attack, always difficult, that We proclaim it. We proclaim it as a duty, an inescapable duty. – Message of His Holiness Pope Paul VI for the Celebration of the Day of Peace, January 1, 1969

9. True peace must be founded upon justice, upon a sense of the intangible dignity of man, upon the recognition of an abiding and happy equality between men, upon the basic principle of human brotherhood, that is, of the respect and love due to each man, because he is man. The victorious word springs forth: because he is a brother. My brother, our brother. – Message of His Holiness Pope Paul VI for the Celebration of the Day of Peace, January 1, 1971

10. Legislation is necessary, but it is not sufficient for setting up true relationships of justice and equity. In teaching us charity, the Gospel instructs us in the preferential respect due to the poor and the special situation they have in society: the more fortunate should renounce some of their rights so as to place their goods more generously at the service of others. If, beyond legal rules, there is really no deeper feeling of respect for and service to others, then even equality before the law can serve as an alibi for flagrant discrimination, continued exploitation and actual contempt. Without a renewed education in solidarity, an overemphasis of equality can give rise to an individualism in which each one claims his own rights without wishing to be answerable for the common good. – Octogesima Adveniens, 1971

11. At the heart of the world there dwells the mystery of man discovering himself to be God's son in the course of a historical and psychological process in which constraint and freedom as well as the weight of sin and the breath of the Spirit alternate and struggle for the upper hand. – Octogesima Adveniens, 1971 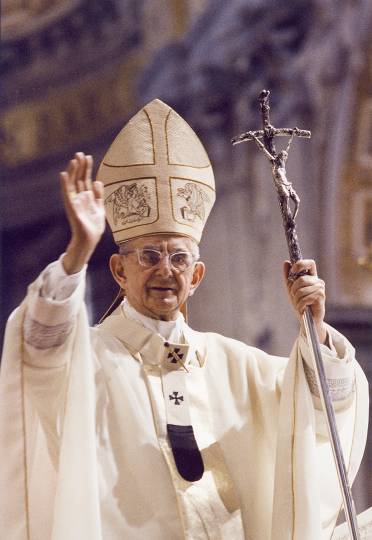 12. Mankind today is seeking a new earth: new not because it will be filled with the superfluous luxuries that technological and industrial progress can provide; but new because the hungry will be fed, the homeless housed, the ill cared for, the illiterate educated – a world where all men can live more humanly. This will be a new earth of justice and love in which those who have been blessed with much will share what they have with those who have less. And for the Christian who has received the gift of eternal life the chance to help others becomes the occasion to express gratitude for the salvation received from the Lord. – Letter of Paul VI to the Archbishops and Bishops of the United States of America, January 8, 1972

13. For joy cannot be dissociated from sharing. In God Himself, all is joy because all is giving. – Gaudete in Domino, 1975

14. Do you really believe what you are proclaiming? Do you live what you believe? Do you really preach what you live? The witness of life has become more than ever an essential condition for real effectiveness in preaching. – Evangelii Nuntiandi, 1975

15. Is it then a crime against others' freedom to proclaim with joy a Good News which one has come to know through the Lord's mercy? And why should only falsehood and error, debasement and pornography have the right to be put before people and often unfortunately imposed on them by the destructive propaganda of the mass media, by the tolerance of legislation, the timidity of the good and the impudence of the wicked? The respectful presentation of Christ and His kingdom is more than the evangelizer's right; it is his duty. It is likewise the right of his fellow men to receive from him the proclamation of the Good News of salvation. – Evangelii Nuntiandi, 1975 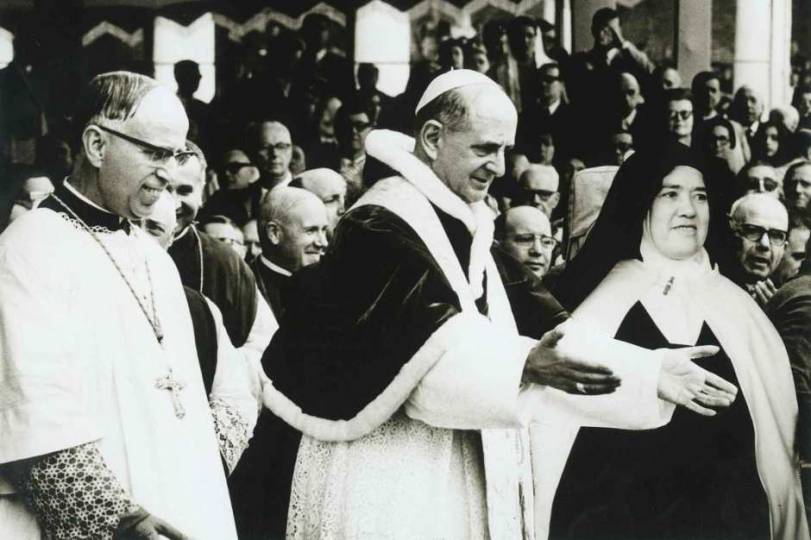 Pope Paul VI is pictured next to Carmelite Sister Lucia dos Santos, one of the three Fatima visionaries, during a visit to the Marian shrine in Fatima, Portugal, May 13, 1967.(CNS photo/courtesy Diocese of Brescia)